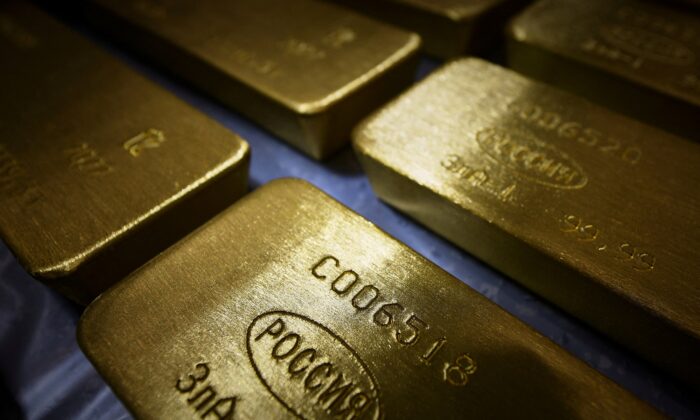 Marked ingots of 99.99 percent pure gold are placed in a cart at the Krastsvetmet non-ferrous metals plant in the Siberian city of Krasnoyarsk, Russia, on March 10, 2022. (Alexander Manzyuk/Reuters)
Markets

Gold on Thursday was headed for its biggest quarterly gains since the coronavirus pandemic-led surge in mid-2020 as concerns over soaring consumer prices and the Ukraine crisis bolstered bullion’s safe-haven appeal.

“The geopolitical situation has been dragging for a month now and inflation data continues to rise. So the overall sentiment in this market right now is people looking for safety,” RJO Futures senior market strategist Bob Haberkorn said.

Gold is considered a safe investment during times of political and financial uncertainty.

Data showed U.S. consumer spending slowed significantly in February, while price pressures continued to mount, with the largest annual spike in inflation since the early 1980s.

Russia’s invasion, which began on Feb. 24, has fuelled a rally in oil prices and industrial metals.

“We could see a pullback in gold if there is some positive news that comes out of the Russia-Ukraine conflict, but I think traders will look at that as a buying opportunity because of inflation fears,” Haberkorn said.

The Federal Reserve has hinted toward aggressive rate hikes this year to fight against soaring inflation, which investors fear could send the U.S. economy into a recession.

The auto-catalyst metal hit a record high of $3,440.76 per ounce earlier this month after the West heaped sanctions on top-producer Russia, before giving up most of the gains as supply fears eased.