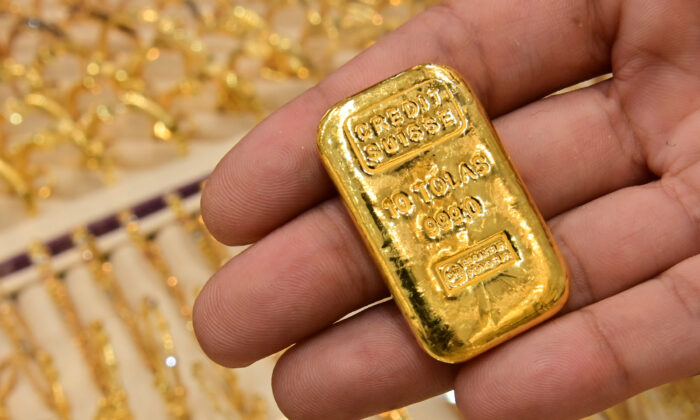 A merchant displays a gold bar at his shop in Dubai Gold Souk in the Gulf emirate on July 29, 2020. (Giuseppe Cacace/AFP via Getty Images)
Gold and Commodities

Gold prices weakened in Tuesday trade to its lowest level in nine months, while the dollar strengthened ahead of the crucial U.S. inflation data release.

“Gold seems to have found a few friends near $1,730 over the last couple of days, without ever seriously looking like it would reverse its recent selloff,” said OANDA senior analyst Jeffrey Halley, according to Reuters.

The June U.S. Consumer Price Index (CPI) data, a measure of inflation, is expected to come out on Wednesday. In the three months of March, April, and May, the CPI has consistently remained above 8 percent. Economists are expecting CPI to climb to 8.8 percent in June, up from 8.6 percent in May.

“A higher-than-expected headline CPI print (on Wednesday) should pave the way for yet another 75 basis points hike by the Fed later this month; a scenario widely interpreted to be a negative for gold,” said Han Tan, chief market analyst at Exinity, according to Reuters. Tan expects gold to stay “significantly suppressed” in the near term.

In June, the Fed raised interest rates by 75 basis points. Talking about the decision, Fed Chair Jerome Powell had commented that a key factor behind raising rates was “inflation expectations,” according to Fox News. The Fed is “absolutely determined” to keep inflation at 2 percent, he added.

Neil Meader, director of gold and silver at consultancy Metals Focus, is predicting gold prices to fall to as low as $1,670 per ounce by late 2022. Metals Focus foresees gold demand to fall by 2 percent this year, driven by decreasing retail investment and jewelry sales in China—the world’s largest consumer of gold.

“As policy rates rise and inflation declines, we expect that real rates and yields will rise materially during the second half, putting pressure on the gold price,” Meader said in a June 8 note, according to S&P Global.

Meanwhile, Goldman Sachs is expecting gold prices to hit $2,500 per ounce by this year-end. The bank believes that the risk of inflation and concerns of a recession in the coming year will push gold prices higher. In a situation where inflation rises rapidly and sustainably, gold will outperform other assets, the bank calculates.