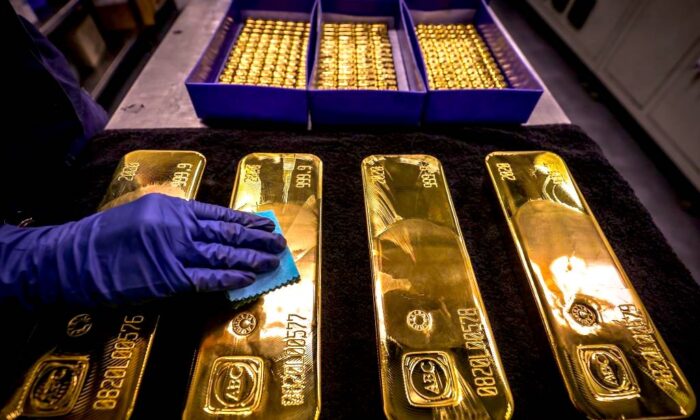 A worker polishes gold bullion bars at the ABC Refinery in Sydney on Aug. 5, 2020. (David Gray/AFP via Getty Images)
Gold and Commodities

August gold futures plummeted more than 2 percent to around $1,765 per ounce on the COMEX division of the New York Mercantile Exchange. This is the lowest level since December 2021.

The yellow metal is down more than 3 percent over the last week, adding to its year-to-date loss of about 3.5 percent. However, over the last 12 months, gold prices have held steady, sliding just 1.2 percent.

But the entire metals market is bleeding red ink on the first day back from the Fourth of July holiday.

August silver futures fell nearly 3 percent to just above $19 per ounce. August copper futures added to their immense losses, with the red metal declining more than 4 percent to $3.44 per pound. August platinum futures lost 2.4 percent to $850 an ounce, while August palladium futures erased roughly 2 percent to $1,900 per ounce.

The entire financial market hemorrhaged Tuesday, from stocks to bonds to commodities. But why?

Gold Market Is Not Glittering

In recent weeks, concerns over economic growth have been the top theme in the broader financial markets, rivaling that of elevated inflation worries.

With more economists and Wall Street firms increasing the odds of an economic downturn or making a recession their baseline scenario, investors are responding by fleeing the stock markets and pouring into more conventional safe-haven assets. One of these has been the greenback.

The U.S. Dollar Index (DXY), which gauges the greenback against a basket of currencies, soared 1.45 percent to a more than 20-year high of 106.66. Year-to-date, the index has spiked more than 11 percent.

A stronger buck is typically bearish for dollar-denominated commodities because it makes it more expensive for foreign investors to purchase.

At the same time, experts purport that traders do want to hold the traditional hedge in their portfolios since it can function as a balancing tool amid growing uncertainty in the global economy and international financial markets.

Gold markets will be monitoring two key economic events this week, “which are likely to bring significant volatility to the price,” warned Naeem Aslem, the chief market analyst at AvaTrade.

The Fed turned ultra-hawkish after the May consumer price index (CPI) surged to an annual rate of 8.6 percent.

Officials raised the benchmark Fed funds rate by 75 basis points. The central bank has signaled that it will pull the trigger on another 75-basis-point rate hike at the July FOMC meeting. The market is increasingly betting that the institution will agree to another three-quarter-point increase in September, according to the CME FedWatch Tool.

Gold is generally sensitive in a rising-rate environment because it lifts the opportunity cost of holding non-yielding bullion.

But the U.S. Treasury market was mainly in the red, with the benchmark 10-year yield down more than 11 basis points to just above 2.79 percent.

The June jobs report data will be released on Friday. The market is penciling in a reading of 268,000. If accurate, this would be the lowest number of new jobs since April 2021.

Market analysts have been pointing to signs that the job market could be starting to cool off during the U.S. central bank’s tightening efforts.

The four-week initial jobless claims average, which removes week-to-week volatility, has been on a steady increase since the beginning of April.

In addition, many large companies, including Meta, Tesla, and Netflix, have been announcing layoffs.

According to Warren Patterson, the head of commodities strategy at ING, weakening conditions in the global economy are negatively impacting metal commodities.

“Clearly, the deteriorating macro picture is weighing heavily on the metals complex. Given the current negative sentiment, it is no surprise that we have seen the copper/gold ratio falling to its lowest levels since February last year,” he wrote in a note.

The latest performance in the commodities market is not surprising, notes Tom Lauman, the head of investment strategy at Wealthplicity.

“The market segments that appear overvalued are the inflation plays: energy, mining, commodities. It is a crowded trade with many investors chasing performance,” he recently told The Epoch Times.

Jim Wyckoff, a senior analyst at Kitco.com, stated that technical indicators are giving the bears a full advantage.

“Bears have the solid overall near-term technical advantage,” he said in a daily commentary. “Prices are in a four-month-old downtrend on the daily bar chart. Bulls’ next upside price objective is to produce a close above solid resistance at $1,800.00. Bears’ next near-term downside price objective is pushing futures prices below solid technical support at $1,700.00.”

Looking ahead for gold prices, the bulls are losing momentum, says Aslem.

“Looking at the price action, it seems that bulls are losing ground, and all eyes are on the major support level of 1,800,” he said in a research note. “If we see the price dipping below this price level and remain below this price mark, we could see the sell-off picking up more strength.”

But a bottom could be soon on the horizon, especially for gold and silver mining stocks based on patterns dating back decades, avers Steven Jon Kaplan, the CEO at True Contrarian Investments.

“Therefore, timewise we are very close to an important bottom for gold mining and silver mining shares if the same pattern repeats again. Of course we have no way of knowing if this means July, August, September, or October before the uptrend begins, as this information is unknowable,” he told The Epoch Times.

“Before Michael Jordan would shoot left, he would fake right to draw the defenders off-sides and be unable to block his layup. The market similarly makes a moderate move in one direction before it makes a huge move in the opposite direction,” he added.