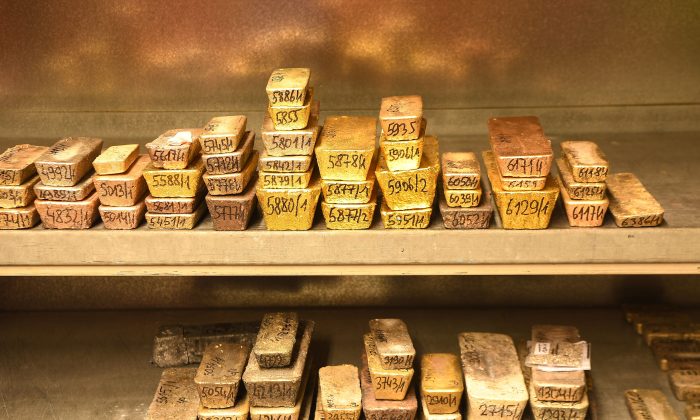 Gold bars and others precious metals are pictured at the Agosi factory in the city of Pforzheim, southwestern Germany, on April 1, 2019. (Patrick Hertzog/AFP/Getty Images)
China Business & Economy

Because the value of dollar-denominated U.S. Treasury obligations payable in the world’s reserve currency tends to rise in times of turmoil, the 10-year U.S. Treasury bond is up 12.6 percent since the start of the year. But gold as the ultimate hedge against the risk of global financial collapse is this year’s top investment performer, up by 28.1 percent.

Gold has an “opportunity cost” of owning because the metal pays no interest, must be exchanged into currencies to make most purchases, and needs safe storage. Nations store bullion in certified depositories, like the 550,000 glistening 12.4-kilogram bars of 99.99 percent pure gold under the New York Federal Reserve worth about $350 billion.

Individuals buying, selling, or holding gold in coins and kilobars (2.2 pounds) rely on the refinery manufacturer’s surface logo stamp for assurance of the gold’s source and purity.

Gold coins were first minted in the 6th century B.C. in the Kingdom of Lydia. Counterfeiters soon learned to shave off edges and mix actual gold with less valuable metals such as copper, lead, and nickel. Later, counterfeit coins were hallowed or mixed with tungsten for weight and density that had a similar “feel” to pure gold. The ancient Romans officially stamped their coins as a sign of authenticity. But gold purity “debasement” during wars and famines was what some historians blamed for the Roman empire’s eventual collapse.

Over the last three years, 1,000 gold kilobars worth about $50 million with Swiss refinery fraudulent stamps marking them as 99.99 percent pure gold were discovered in top bank depositories, such as the J.P. Morgan & Chase vault across from the New York Federal Reserve building. The quality of the embossed logos was so professional, experts suspect that many more counterfeits bars are still outstanding.

China has been the top market for gold trading of about 1,000 tonnes per year, according to the China Gold Association. About 80 percent of that gold is consumed for jewelry production and about 200 tonnes is sold in kilobars for investment. But 400 to 600 tonnes of gold kilobars hidden in sea containers and cars are smuggled out of mainland China and across the border to Hong Kong, according to a recent report by Reuters.

Corporate executives and commercial bankers familiar with the gold markets told Reuters they believe the forgeries originated in China, and then spread internationally through supply chains. But the Shanghai Gold Exchange that regulates the Chinese gold market and storage stated: “The process for gold (material) to enter the warehouse is strictly managed and in compliance with the regulations.”

The timing of the gold forgeries potentially originating in China comes just three weeks after the Shanghai Gold Exchange announced the launch of the “Gold Road” to extend its gold industrial supply chain throughout the 68 One Belt, One Road participant nations. One Belt, One Road is Beijing’s foreign policy project of building geopolitical influence through financing infrastructure projects throughout Southeast Asia, Europe, Africa, and Latin America.

Under the Gold Road, Chinese manufacturers and jewelers will be offered so-called “gold leasing” to finance gold regional trading, vaulting, and transfers. But the new financing scheme would seem to be highly reliant on refinery authenticity stamps that prove the gold bullion and jewelry, offered as “gold leasing” collateral, are not counterfeit.