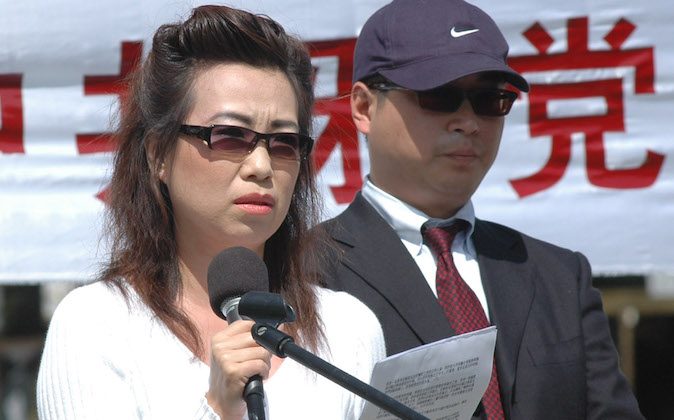 Informants Annie and Peter in Washington DC on April 20. Their speeches were their first public testimony about large-scale organ harvesting atrocities in China. (The Epoch Times)
China

WASHINGTON – Two sources who exposed concentration camps in China told their stories in public for the first time on Thursday afternoon.

The two Chinese sources, who go by their aliases Annie and Peter, spoke at a rally at McPherson Square the same day Chinese leader Hu Jintao met with U.S. President George W. Bush, explaining why they felt the need to speak out about the existence of organ harvesting operations in labor camps in China.

“If I don’t stand up, perhaps the other witnesses will not dare to stand up,” said Annie, referring to other informants of the camps that have yet to go public with their information.

Peter has received many threatening or strange phone calls since his private interview about the organ harvesting, but expressed his determination in going public with his information despite fears of attack from the Chinese regime.

“As I stand here today and making it public, I am paying a great price, maybe even my life, but I believe it is not for nothing,” he said. “I can help other people who know about such incidents to tell the truth to the public… of what is really happening in [Chinese] society.”

The 500-strong crowd at the rally chanted in support of the two sources, shouting, “Annie and Peter are heroes!”

The two gave details about organ harvesting in China, particularly in Sujiatun in northeastern China, where 6,000 Falun Gong practitioners were at one time detained. They expressed the importance of coming out publicly in order to provide more credence to their accounts.

“Be it the U.S. government or the Chinese government, they have denied the existence of this incident, so it was needed for me to speak out about this,” said Annie.

The U.S. State Department has said that they made two visits to the hospital in Sujiatun and found no evidence of organ harvesting, but in its April 14 news release, noted that “we remain concerned over China’s repression of Falun Gong practitioners. We are also concerned by reports of organ harvesting.”

The organ harvesting atrocities were first revealed when Peter, then given the alias “Mr. R.,” said on March 9 that Falun Gong practitioners were being killed on a large scale for their organs, which would then be sold for profit.

Annie, whose ex-husband was a neurosurgeon at the Liaoning Provincial Thrombosis Hospital, the hospital connected to the Sujiatun camp, gave an interview with The Epoch Times on March 17. She said that her husband had done operations on live Falun Gong practitioners and that the practitioners’ bodies were thrown into incinerators after the operations, sometimes while they were still alive.

Peter said that the atrocities at Sujiatun were just “the tip of the iceberg.”

On March 31, The Epoch Times published a report based on information from a military doctor who stated that there were 36 similar camps all over China, and the largest one, codenamed 672-S, holds over 120,000 people.

“I hope that they go and investigate this,” said Annie. “If this isn’t happening in China, then open up the doors to your country and let everyone participate, look, and investigate.”

Annie also mentioned that she would be willing to testify in Congress.