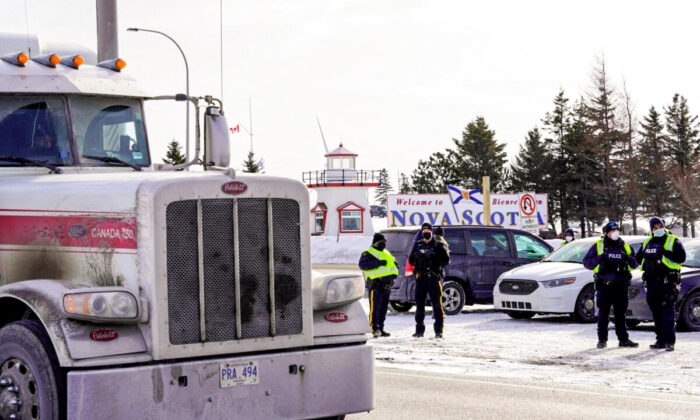 GoFundMe is withholding millions of dollars raised by a trucker convoy protesting the COVID-19 vaccine mandate, due to a lack of transparency as to how the funds will be used, a spokesperson confirmed.

The Freedom Convoy 2022, a huge group of truck drivers from across Canada, left Vancouver, northern British Columbia on Sunday where they began the long drive to the city of Ottawa.

Once in Ottawa, truck drivers from every province will come together under a group called Canada Unity and form a large demonstration against the mandate on Jan. 29.

Ahead of the demonstration, organizers of the convoy have raised over $5 million from thousands of donations and have been inundated with messages of support from people across the globe.

However, a spokesperson for GoFundMe has confirmed that the funds raised by the truckers are being temporarily held by the crowdfunding platform due to a lack of transparency as to how they will be used.

“We require that fundraisers be transparent about the flow of funds and have a clear plan for how those funds will be spent. In this case, we are in touch with the organizer to verify that information,” Rachel Hollis, a spokeswoman for the crowdfunding platform, said in an emailed statement to The Toronto Star.

“Funds will be safely held until the organizer is able to provide the documentation to our team about how funds will be properly distributed,” the spokeswoman added.

As per the GoFundMe page, the organizers of the trucker convoy are Benjamin Dichter and Tamara Lich, who launched the campaign on Jan. 14.

It states that the money raised will be dispersed towards fuel, food, and lodging for the marchers.

“In order for your generous donations to flow smoothly, the good people at Go Fund Me will be sending donations directly to our bulk fuel supplier and are working out the details now which means your hard-earned money is going to straight to who it was meant for and need not flow through anyone else,” organizers said. “Any leftover donations will be donated to a credible veterans organization which will be chosen by the donors.”

Despite the statement from the GoFundMe spokesperson, in a Facebook post on Tuesday, The Freedom Convoy 2022 denied that the funds raised had been frozen.

“Hey FREEDOM FIGHTERS!!! We know there is much talk going on about the GOFUNDME but rest assured, if it had been frozen then y’all wouldn’t be able to show the love and donate,” organizers said.

The Epoch Times has contacted spokespersons for GoFundMe and The Freedom Convoy 2022 for comment.

Sunday’s march comes in response to a federal vaccine mandate for truck drivers that went into effect on Jan. 15, despite opposition from members of the trucking industry.

The vaccine mandate could see 10 to 15 percent, or about 12,000 to 16,000 of truck drivers off the road, estimates the Canadian Trucking Alliance (CTA), which said it does not support and strongly disapproves of the demonstrations.

Organizers of The Freedom Convoy 2022 say the mandates are “destroying the foundation of our businesses, industries, and livelihoods.”

“We are taking our fight to the doorsteps of our Federal Government and demanding that they cease all mandates against its people. Small businesses are being destroyed, homes are being destroyed, and people are being mistreated and denied fundamental necessities to survive. It’s our duty as Canadians to put an end to this mandate,” organizers say.