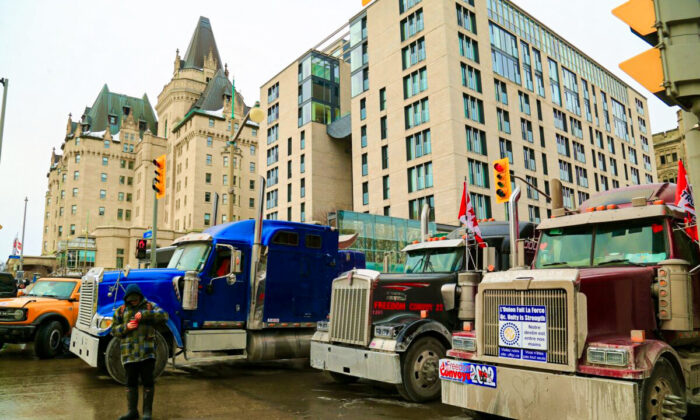 GoFundMe Says All Donations to Trucker Convoy Will Be Automatically Refunded; Florida to Investigate

The GoFundMe fundraising platform said Feb. 5 it will automatically refund donations made to a trucker convoy in Canada protesting COVID-19 vaccine mandates after backlash.

GoFundMe said Friday it was preventing the funds from going to organizers of the Freedom Convoy and would instead send the money to “established charities verified by GoFundMe.”

The justification for the unusual move? “We now have evidence from law enforcement that the previously peaceful demonstration has become an occupation, with police reports of violence and other unlawful activity,” GoFundMe said.

The website didn’t provide any evidence of the alleged violence or unlawful activity.

Jon Carpay, president of Justice Centre for Constitutional Freedom, a legal group representing the convoy organizers, told The Epoch Times that the fundraising company “has no credibility” without making the evidence public. Organizers told a briefing that police officers were using measures typically utilized by “oppressive regimes” to try to take away the truckers’ “right of peaceful assembly and freedom of expression” and media reports and officials were falsely linking crimes committed by outsiders with the protesters.

In its update on Saturday, GoFundMe, which hasn’t responded to requests for comment, claimed it had already enabled donors to get a refund and only the remaining funds would have been distributed to charities.

“However, due to donor feedback, we are simplifying the process. We will automatically refund all contributions directly—donors do not need to submit a request. You can expect to see your refund within 7–10 business days,” the company said.

GoFundMe’s actions have drawn scrutiny, particularly in light of the platform allowing campaigns for people linked to violence before.

Florida Gov. Ron DeSantis, a Republican, said it was “a fraud” for GoFundMe “to commandeer $9 [million] in donations sent to support truckers and give it to causes of their own choosing.”

DeSantis said he will work with Florida’s attorney general, Ashley Moody, “to investigate these deceptive practices—these donors should be given a refund.”

“My office will be looking into whether or not #GoFundMe violated our state law,” Landry, a Republican, wrote on Twitter, adding that residents who donated to the convoy should contact his office’s consumer protection section.

Convoy organizers have recently turned to GiveSendGo, a GoFundMe competitor, to raise funds. GiveSendGo was down Saturday due to “bot cyber-attacks,” a spokeswoman told The Epoch Times via email. She said the company was “working as fast/hard as we can” to restore the website.