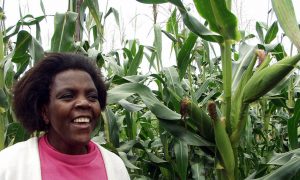 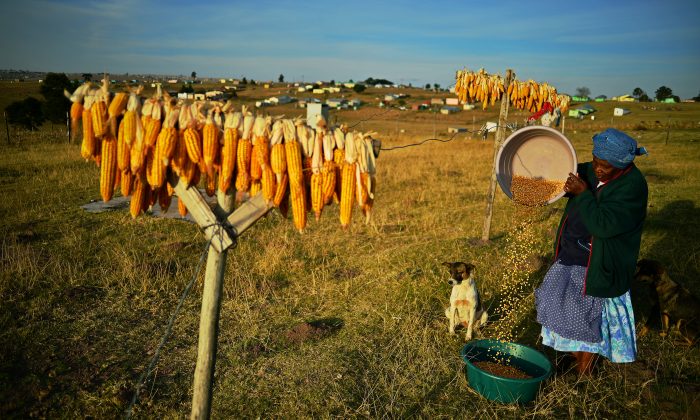 Nono, an elderly maize farmer in Qunu, South Africa, pours maize into a bucket. Much of the maize in the country is now genetically modified. (Carl de Souza/AFP/Getty Images)
Africa

Pest adaptation to GMOs a global problem
By Zachary Stieber

South Africa’s government is increasingly opening the door to genetically modified organisms (GMOs)—along with the issues that arise as GMOs sweepingly change the country’s agriculture industry.

Many African nations are wary of welcoming GMOs. South Africa, however, is now the world’s eighth-largest GMO producer, with 2.9 million hectares (4.9 million acres) of GM maize, soybeans, and cotton grown in 2012.

One of the major problems South Africa has encountered is the increasing resistance of pests to the GM crops. A misuse of the technology is to blame, say some researchers.

Pests have been a big problem in South Africa for decades, and GM crops, when first introduced, were seen by many as a new and much-needed solution to the problem.

Despite the higher cost of GM seeds, adoption by many farmers was quick, steady, and widespread.

RELATED: GMOs in South Africa: Facts at a Glance

The first GM crops, yellow maize hybrids from Monsanto, were introduced in 1997. By 2009, 98 percent of cotton, 85 percent of soybean, and 73 percent of maize grown in the country was GM.

During the mass transition, however, some regulations and controls were overlooked, and the result has been a resistance developed by pests to the toxins produced by GM plants. The plants are genetically engineered to kill pests.

Refuge areas are supposed to be created, in which a certain number of pests are allowed to live so that they don’t develop a resistance. Johnnie Van den Berg of the School of Environmental Sciences and Development at North-West University worked with researchers to survey 105 commercial farmers. Most farmers did not follow refuge requirements.

Because of this critical mistake, the pest targeted by GM maize—stem borers—developed widespread resistance to the crops.

“This study shows irresponsible management of GM crop technology by farmers, chemical, and seed companies,” the researchers said in the 2010 report.

Farmers had mixed views of the growing stem borer resistance. In Christiana, one of the six areas surveyed, farmers were highly aware of the resistance, and only 34 percent said they would plant Bt maize in the future.

In the other five areas, the high majority (70 to 100 percent) said they would plant Bt maize in the future, though at least 45 percent in each area said the growing resistance to stem borer may prevent them from doing so sometime in the future.

At the same time, the majority of farmers expressed an overall positive attitude toward Bt maize, associating it with increased productivity and convenient management.

Professor Van den Berg wrote in an email to Epoch Times that there are many benefits to GM crops, including farmers saving money by spending less on fertilizer and other inputs, as well as getting higher yields. However, the resistance pests have developed against both Bt cotton and maize in some areas of South Africa means “the value of GM technology” has been lost in these areas, he said.

“The main message that we send out to industry and the farming community is that stewardship of GM technology is very important and that GM technology should not be used as a silver bullet approach but as part of integrated pest and weed management strategies,” he said. Private companies, such as Monsanto, that develop GM technologies will determine the future of GM crops in South Africa, he said.

The growing pest resistance is part of a worldwide phenomenon.

In an analysis of 77 studies conducted in eight countries, a team of U.S. and French scientists found that nearly half of major pest species had become resistant to Bt cotton or corn plants, including the one in South Africa.

“Either take more stringent measures to delay resistance, such as requiring larger refuges, or this pest will probably evolve resistance quickly,” said Bruce Tabashnik, a professor at the University of Arizona and lead author of the study published in the journal Nature Biotechnology.

On the other hand, the development of resistance in pests is inevitable even with conventional pesticides, said Karl Kunert, a professor at the Plant Science Department of the Forestry and Agricultural Biotechnology Institute at the University of Pretoria.

While “resistance will ultimately occur” with all pesticides, including those produced by GMOs, proper application of GM technology “has delayed such development of resistance, which certainly speaks for the technology,” he wrote in an email.

He said South Africa does not yet have the expertise needed to deal with GM crops, but the crops could have benefits beyond producing more food, such as providing economic opportunities and health benefits in less developed areas.

“A simple example is engineered cotton with a better fiber quality,” he said. It “addresses the need for better nutrition, which cannot be easily addressed by simply supplementing food in Africa.”

Thus, the question of whether it’s necessary for GM crops to be grown there “is rather a question of benefit and demand by both farmers and consumers.”

Rose Williams, Biowatch’s director, wrote in an email to the Epoch Times that GM crops are not necessary. They undermine food sovereignty for the country, she said.

First, the seeds are patented, meaning the farmers have to buy seeds every year instead of re-using them. Second, the relative danger of GM crops contaminating non-GM crops is high. Third, the lack of bio-diversity in the mono-crop industrial model that GMOs are a part of. And lastly, the chemicals used in GMO production, which “poison the land” and “are not part of healthy and culturally appropriate food.”

Mariam Mayet, an environmental lawyer who represents Biowatch South Africa, spoke to the increased pesticide and herbicide use.

The growing pest resistance has forced Monsanto, one of the largest GM crop and pesticide producers, to sell farmers more chemicals to control the epidemic, she said. Monsanto has completely abandoned the maize variety it was using and has introduced another variety.

“This, too, will result in insect evolution, necessitating more pesticide use, and so the treadmill will continue,” she said via email.

Mayet also takes issue with the common statements that GM crops decrease pesticide use, lead to greater yields, and are less susceptible to pests and drought.

In the United States, for instance, the introduction of GM crops resulted in a net increase of pesticide use, Mayet said, citing research by the Organic Center. From 1996 to 2009, pesticide application increased by 144,000 tons. In Brazil, pesticide sales increased by 72 percent from 2006 to 2012.

“We appear to be aping these trends here in South Africa,” she said. “Over half of our GM maize is now herbicide-tolerant and domestic glyphosate [a type of herbicide] use has rocketed accordingly, from 12 million liters [3 million gallons] in 2006, to 20 million liters [5 gallons] at present. In addition, between 2007 and 2011 glyphosate imports increased by 177 percent.

“This is particularly disturbing in the case of South Africa, as it is clear that our food safety authorities do not have the capacity to adequately monitor pesticide residue levels in our food.”

The country’s Department of Environmental Affairs website outlines the potential benefits of GM crops, including higher yields, and lower herbicide use. However, the department also outlines the main concerns, including potential risks to human and animal health.

GM crops are vetted by several agencies before being approved for commercial production. Notably, a type of locally developed GM potato was rejected in 2009, though 49 varieties of canola, cotton, maize, rice, and soybeans have been approved in the country.

“Both these two fields were being sacrificed to develop biotechnology,” she said.

A bill currently on the table could close a loophole in the the current GMO labeling law, mandating all food with more than 0.9 percent genetically modified ingredients be labeled.

The Department of Science and Technology’s manifesto on biotechnology states that GM crops are safe because any approved in South Africa have been “subject to extensive testing and regulations.” At the same time, it says, “There are groups who believe the effects of GMOs will only be determined after many, many years of consumption, and until this time, we should proceed with caution.”

It does not appear that any studies on the health effects of GM food have been conducted in the country, though researchers have looked at multiple other aspects.

South African scientists are developing unique GM varieties not found anywhere else. This could cause trouble, however, in exporting to countries that forbid non-approved GM strains, according to a 2010 Council of Scientific and Industrial Research study titled “GMOs in Africa: Opportunities and Challenges in South Africa.”

Several problems persist in the country, including limited funding for agricultural biotechnology research and a shortage of trained biodiversity experts, which means only one GM crop (MON810) out of the 129 in the country is being monitored.

Though the production of GM crops is kept separate from non-GM crops, a 2011 South African National Biodiversity Institute study showed a flow of genes from the GM Bt maize to non-GM maize. As most farmers now grow GM maize, and cross pollination does occur despite efforts to separate the crops, it is difficult to find non-GM maize in the country.

Knowledge of GMOs and Labeling

A study of 7,000 adults aged 16 and older across the country found that eight out of ten South Africans have no knowledge about biotechnology. The 2005 study by the Public Understanding of Biotechnology found that 63 percent of respondents didn’t know whether they had ever eaten food containing genetically modified ingredients.

Also in 2005, researchers from the GMO Testing Facility at the University of the Free State reported on the lack of a system to verify claims made on labels. They found 71 percent of products in South African stores labeled “non-GM,” “GMO free,” “organic,” contained genetically modified ingredients.