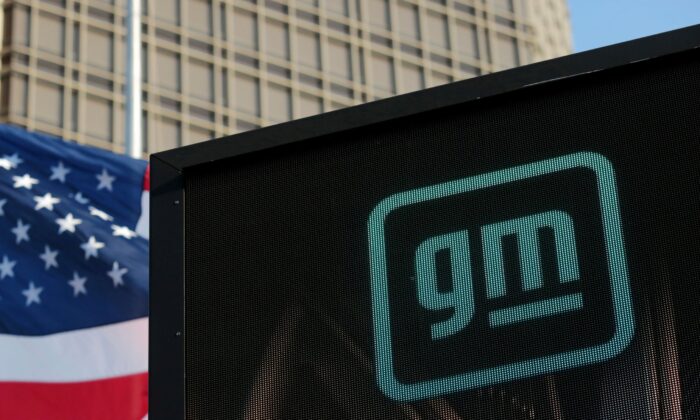 The new GM logo is seen on the facade of the General Motors headquarters in Detroit, Michi., on March 16, 2021. (Rebecca Cook/Reuters)
Companies

General Motors Co.’s vertical integration capabilities and the conversion of its massive customer base to electric vehicles over the coming years represents a transformational opportunity for the legacy automaker, according to Wedbush Securities.

Wedbush analyst Daniel Ives maintained an “Outperform” rating on General Motors with a price target of $85 per share.

Ives, who has been a long-time Tesla Inc. bull, believes that GM’s EV transformation story heading into 2022 is starting to get recognized by Wall Street investors, with an electric-vehicle driven re-rating of the automaker’s stock currently in process.

“We believe in a bull case scenario GM’s stock could hit $100 over the next 12 to 18 months as the EV vision begins to take shape,” Ives wrote in a research note.

GM is in a great position to take advantage of a $5 trillion market emerging over the next decade as the automaker develops “game-changing” battery technology under the Ultium Platform, Ives added.

GM, known for its big trucks and sports utility vehicles, plans to spend $35 billion through 2025 to accelerate its switch to electric vehicles.

The Mary Barra-led automaker aims to have 40 percent of its U.S. portfolio to be battery electric vehicles by the end of 2025 and transition to an all-electric portfolio by 2035.

Apart from GM, legacy rivals such as Ford Motor Co. and Volkswagen AG are also setting aside more investments into electric vehicles as they play catch up in the market disrupted by Tesla.

The electric vehicle sector is seeing high interest from investors amid the growing appetite for electric vehicles and as market leader Tesla recently surpassed a market capitalization of $1 trillion.