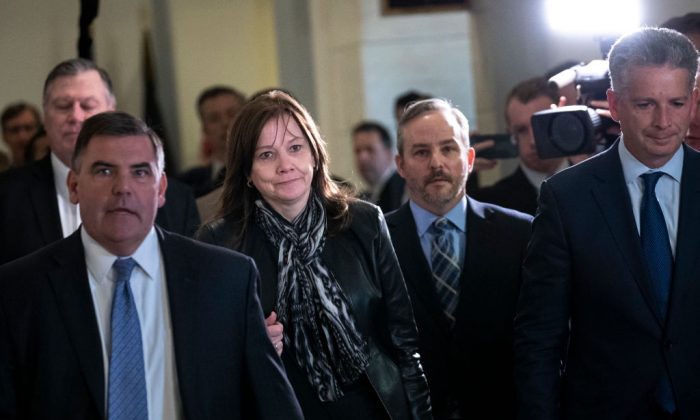 GM Cutting 4,000 Workers in Latest Round of Restructuring

WASHINGTON—General Motors Co on Feb. 4 said it was starting to hand pink slips to about 4,000 salaried workers in the latest round of a restructuring announced in late November that will ultimately shrink its white-collar workforce in North America by 15 percent out of 54,000.

Two people briefed on the cuts said GM is cutting hundreds of jobs at its information technology centers in Texas, Georgia, Arizona and Michigan and more than 1,000 jobs at its Warren, Michigan Tech Center. GM is filing new required mass layoff notices with state agencies and disclosed the cuts to lawmakers.

The largest U.S. automaker announced in November it would cut a total of about 15,000 jobs and end production at five North American plants. The cuts include eliminating about 8,000 salaried workers, or about 15 percent.

“These actions are necessary to secure the future of the company, including preserving thousands of jobs in the U.S. and globally. We are taking action now while the overall economy and job market are strong, increasing the ability of impacted employees to continue to advance in their careers, should they choose to do so,” GM spokesman Pat Morrissey said, adding the bulk of the cuts should be completed in the next two weeks.

In November, the company announced plans to end production at the U.S. factories and one in Ontario as part of a major restructuring designed to cut costs and divert resources to development and manufacturing of trucks, SUVs and electric and autonomous vehicles.

While some of the roughly 3,300 U.S. factory workers will retire, most of the rest will be offered one of 2,700 jobs the company plans to add at factories where production will increase, GM announced on Dec. 14, 2018. Some would have to uproot and move to other cities for jobs.

“Our focus remains on providing interested employees options to transition including job opportunities at other GM plants,” CEO Mary Barra said in a statement of the factory workers.

That still leaves the majority of the 14,000 cuts hitting white-collar workers.

GM is also cutting its executive ranks by 25 percent and last week laid off three senior people in its Washington office and some other small salaried layoffs previously took place.

Trump, who made a 2017 speech near GM’s Lordstown Assembly plant in Ohio, said in November the company had “better” find a new product for that plant.

But GM Chief Executive Officer Mary Barra wrote last week: “We are more convinced than ever that our strategy is sound and in the long term.”

Last month, Comprehensive Logistics said it would cease operations at its facility in Lordstown that provides logistics and warehousing, impacting about 180 jobs. Magna International Inc is also laying off about 120 people at its Lordstown Seating Systems plant that makes seats for GM vehicles.