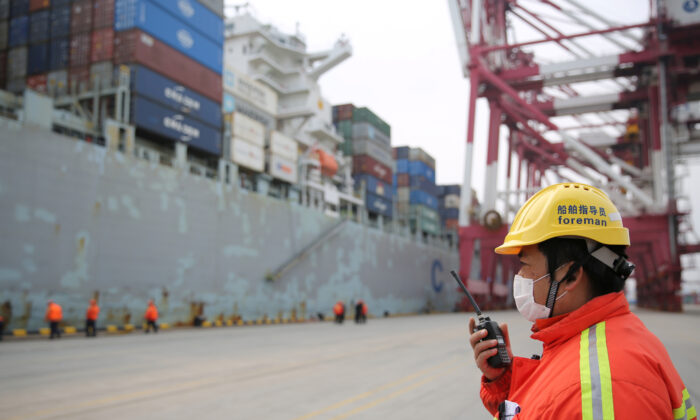 A foreman wearing a face mask works as a cargo ship docks at a container terminal of Qingdao port in Shandong Province, China while the country is hit by an outbreak of the new coronavirus, on Feb. 4, 2020. (cnsphoto via Reuters)
Economies

CCP Virus Is a Catalyst for Globalization’s Decline, Expert Says

Amid the coronavirus pandemic, globalization has entered a phase of rapid decline, according to financial expert and author Charles Hugh Smith. Smith based his claim on the S-Curve model used to predict the life cycle of a business or an economy.

Smith argues in a paper, titled: “Goodbye to All That: The Demise of Globalization and Imperial Pretensions,” that all economic cycles follow an S-Curve. This S-Curve is characterized by 1) a beginning or “ignition phase”; 2) an expansion phase where productivity reaches its optimum levels; 3) a peak phase where productivity and investment rewards stagnate; 4) a decline phase where the factors that have driven the economic cycle for decades comes to a halt.

The CCP virus, commonly known as the novel coronavirus, has served as a catalyst to expose the financial risks associated with economies facing massive debt build-up during a period of slowing cash flow.

McKinsey & Company has been warning about global growth stagnation due to a “shift in the composition of employment in the economy toward lower-productivity sectors; a lack of productivity-accelerating sectors after the financial crisis; weak capital-intensity growth and uneven rates of digitization across sectors.”

In 1974 the United States was suffering from oil production peaking, mired in its worst post-WWII recession and President Nixon soon to resign. But Secretary of State Henry Kissinger heralded the coming of an American economic boom driven by financialization when he stated: “Who controls the food supply controls the people; who controls the energy can control whole continents; who controls money can control the world.”

Over the last four and a half decades, the U.S. Federal Reserve, American banks and multi-national regulatory authorities dominated by the United States fostered an explosion of investments and consumption by leveraging the GDP ratios of the world’s major economies’ from 20 percent to 70 percent.

But according to Smith, “It’s human nature to reckon the current trend will continue running more or less forever, and that temporal, contingent structures are permanent.” He warns that the “unique set of conditions that created fertile ground for a global surge of credit, consumer spending and transfer of production to China has expired.”

Benefits were widely distributed across developed nations during the boost and early expansion phases of the S-Curve. But productivity gains from emerging nations’ lower labor costs and lax environmental standards began acting as a magnate for outsourcing American jobs during the late stages of the economic acceleration phase.

As S-Curve productivity growth stagnated after the 2009 financial crisis, U.S. elites continued to justify further transfers of investment capital, jobs and technology to the third world as necessary to provide developed nation consumers with low-prices.

Smith says the trillions of dollars created through financialization by developed nations has strayed from productive investments into speculation for short-term gains. With production over-capacity, near-zero profits and no productivity gains to generate new cash, Smith warns the S-Curve has rolled over into rapid decline.

Smith views the CCP virus pandemic as informing the world that the “risk-free paradise of globalization is actually riddled with potentially catastrophic risks.” He views China’s spending on its Belt and Road Initiative (BRI, also known as One Belt, One Road) that Morgan Stanley recently predicted could reach $1.2–1.3 trillion by 2027, as exemplifying “an era that has already turned to dust.”

The Epoch Times refers to the new coronavirus as the CCP virus because the Chinese Communist Party’s coverup and mismanagement allowed the virus to spread throughout China and create a global pandemic. The virus started in China last year before spreading around the world.