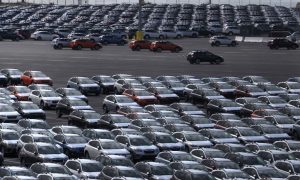 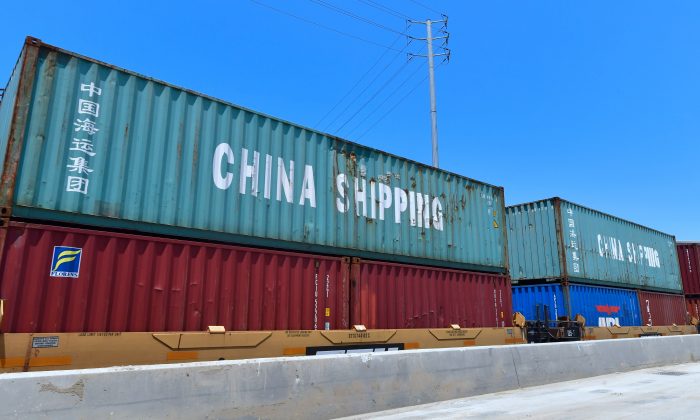 Shipping containers, including those of China Shipping, a shipping conglomerate under direct administration of China'a State Council, await transportation on a rail line at the Port of Long Beach on July 12, 2018 in Long Beach, California. (Frederic Brown/AFP/Getty Images)
China Business & Economy

Almost a year ago, I wrote that a protracted trade war between the United States and China “could permanently alter the landscape of the global supply chain.”

Today, the trade conflict remains and that supply chain shift is now underway. Many multinational companies are planning to move existing China-based manufacturing capabilities abroad, and some are evaluating their overall Chinese footprint and strategy.

By some measures, the United States has already won the trade war. President Donald Trump has been able to successfully convince companies to reassess their China strategy—either forcibly through increased tariffs, or by goading Beijing into baring its intentions and harassing foreign companies.

Either way, the existing paradigm and overall discourse on doing business in China has been challenged.

From this vantage point, it’s tough to see the trade war resolving itself in the near future, even as both countries prepare for another round of talks this month at the G-20 Summit. Beijing’s rhetoric has hardened recently, describing its conditions in resolute terms that U.S. negotiators such as Commerce Secretary Wilbur Ross would be unlikely to accept.

On the U.S. side, the trade war has been quietly gaining bipartisan support. Beijing’s reliance on a Trump defeat in the 2020 elections and a potential future compromise is becoming more tenuous—even if Trump loses, it’s no slam dunk that a Democrat president would let Beijing off the hook easily.

Most of the largest U.S. companies didn’t sign. Neither did the U.S. Chamber of Commerce, nor the National Association of Manufacturers. Beijing’s lobbying effects in Washington seem to be waning.

The “decoupling,” as some experts are calling the trend of moving sections of the value chain out of China, is proceeding in earnest.

And it’s not all due to tariffs. The trade war has ignited conversations within corporate boardrooms about overall business risk and diversification of a company’s value chain. Chinese wages and benefits are growing. The business and legal environment in China, especially toward foreign companies, is tough.

It’s easy for pundits and academics to trivialize macro trends. For some products, China has the most skilled and efficient manufacturing base. Yet, diversifying manufacturing is the right long-term strategic decision. But in the short term, shifting production will require investments, training, and tough logistical changes. And it will take time and money.

Apple inquired with its chief suppliers to evaluate moving 15 to 30 percent of their production capacity to Southeast Asia from China, the Nikkei Asian Review reported on June 19. “Multiple sources say that even if the (trade) spat is resolved, there will be no turning back,” Nikkei said.

It was also suggested that the potential shift was under consideration by Apple even before the trade war became protracted because of increasing labor costs, low birthrate, and concentration risk of relying too much on one country for production.

Google’s parent company Alphabet is also moving some production of its Nest thermostats and other hardware to Taiwan and Malaysia from China, Bloomberg News reported earlier this month, citing people familiar with Google’s thinking. The move follows earlier shifts of motherboard hardware production to Taiwan from China to avoid the 25 percent U.S. tariffs.

Luxury furniture and furnishings company Restoration Hardware announced that it is “moving certain production and new product development out of China, plus exploring new partnerships and expanding our own manufacturing facilities in the United States,” the company said during its first quarter 2019 earnings release. In addition, the company has selectively raised prices to mitigate the profit impact of ongoing tariffs.

The Wall Street Journal reported June 12 that Nintendo is also tweaking its global supply chain by moving some production of the new versions of its popular Switch gaming console to Southeast Asia from China.

Lotte, the South Korean conglomerate, is withdrawing its Lotte Mart retail chain from China after years of challenges. The company is now shifting its investment to Southeast Asian countries such as Vietnam and Indonesia, a June 20 Financial Times report noted.

“Of the companies that were massively optimistic about China three or four years ago, now more than half of them are talking about reducing their exposure, both as a market and a manufacturing base,” Peter Kim, investment strategist at Mirae Asset Daewoo, told the FT.

Lotte is one of several South Korean multinationals reducing their footprint in the world’s No. 2 economy. For these companies, the business environment, not tariffs, drives the decision. Samsung Electronics, for example, decided this month to cut production and reduce its headcount at its only smartphone assembly plant in China because of high costs and slowing China sales, in the face of stifling competition from lower-priced domestic rivals.

Unemployment a Danger to Stability

What are the consequences of companies moving production out of China? For one, it allows companies to keep most of their existing profit margins by circumventing U.S. tariffs. The flip side of that trend is increased stress on China’s employment situation.

Last summer, the Chinese Communist Party’s Politburo, a 25-member body representing the Party elite, set a goal of “six stabilities” for the country. Not coincidentally, the top “stability” mentioned by Beijing was that of employment.

That goal will fail if the trade war drags on. American economist Xia Yeliang told the Epoch Times earlier this month that as many as 14 million Chinese jobs could be in jeopardy: “If it [latest U.S. tariff hike] affects 2 percent of GDP growth, it means that China has a large number of people who are unemployed.”