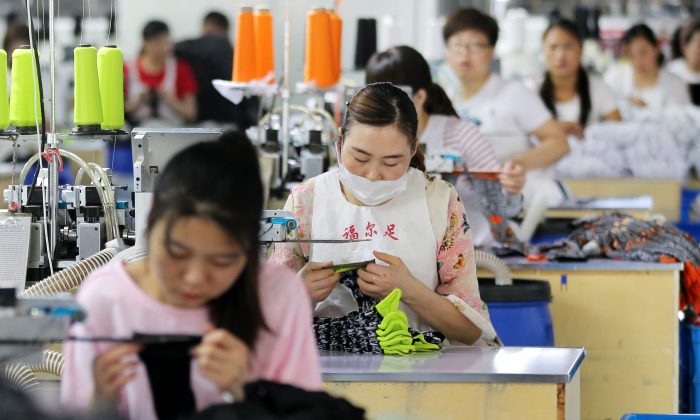 Employees work on socks that will be exported at a factory in Huaibei, Anhui province on June 22 (-/AFP/Getty Images)
China Business & Economy

The trade conflict between China and the United States, should it drag on, could permanently alter the landscape of the global supply chain.

The Chinese manufacturing sector could suffer, as goods exported from China to the United States could easily be manufactured in other low—and sometimes even lower—cost nations.

Examining the product mix of bilateral trade between China and the United States over the last decade, Chinese exports to the United States have slowly climbed up the value chain, with computers and electronic components as the biggest import, followed by electrical equipment and appliances, according to a July 19 report from the U.S.–China Economic and Security Review Commission. Apparel and accessories, which was the No. 2 import a decade ago, has declined to fourth place in 2017, according to the report.

On the other side of the ledger, the types of U.S. exports to China have largely remained consistent. Transportation equipment exports have soared mainly due to China’s recent construction and building boom, but other categories remain consistent proportionally—such as agricultural products, chemicals, and semiconductors—while overall volume has climbed.

In the short-to-medium term, China will have difficulty replacing its U.S.-driven imports. The Chinese communist regime has ongoing plans to invest in its own high-technology sectors (as per “Made in China 2025,” among other programs), and it expects to gradually replace such imports with domestically produced technologies. Nonmanufactured goods, such as commodities and agricultural products, should continue to prosper due to China’s growing middle class and continued economic expansion.

On a micro level, the ongoing tit-for-tat tariff escalation has introduced new difficulties for companies operating on a global scale. As firms begin planning for 2019, they must carefully consider a combination of making structural changes to their global supply chain to avoid tariffs, shouldering a portion of the higher costs on behalf of their customers, and assessing the longevity of the ongoing trade dispute.

Factor in the nontrivial possibility of an economic recession over the next 12 to 18 months and corporate strategists are in an unenviable position heading into next year.

Some Chinese manufacturers are considering moving production to South Asia to avoid tariffs from the United States. Certain aspects of this had already been planned, but the trade conflict has accelerated their timeline for this shift.

“We have to analyze which Asian countries are good for our customers … to offset the China risk,” Joe Chau, who manages a baby garment factory in the southern province of Guangdong, told the Financial Times.

Chiu Chi-hong, another Guangdong businessman who owns a toy factory, told the FT that he plans to travel to Burma (also known as Myanmar) with 30 other Chinese manufacturers to assess the possibility of moving production to the South Asian country.

“Companies are actively seeking alternatives to ‘Made in China,’” according to a July investigative study by University of Delaware professor Sheng Lu for the U.S. Fashion Industry Association.

“This does not seem to be due to concerns about cost, but rather the worries about the escalating U.S.–China trade tensions,” Lu noted. The annual study polled 28 executives of large, predominantly U.S.-based fashion retailers and wholesalers.

While clothing and most other consumer goods are not yet part of U.S. tariffs imposed on Chinese imports, companies are proactively making contingency plans or accelerating previous plans to make the shift. As of now, electronics and apparel are two categories with the biggest potential for a production move.

Vietnam is a big beneficiary of the recent manufacturing shift away from China. The Nikkei Vietnam Manufacturing Purchasing Managers’ Index reading for June saw one of the biggest jumps since the survey began in 2011, with the index rising to 55.7 in June from 53.9 in May, with any reading above 50 signaling economic expansion.

Vietnamese factories were “taking on extra staff at a record pace during June,” according to Andrew Harker, associate director at IHS Markit, which compiles the survey.

Impact on Revenues and Profits

Today’s complex global supply chains were built over decades of increasing global trade with minimal tariffs. A company may source a variety of components from several countries, with final production occurring in China or the United States, for example. In such a model, knock-on effects from tariffs could add significantly to the cost of production, and harm revenues and profitability.

Companies do have some options. If strategists believe the trade war will be short-lived, companies can choose to absorb higher costs instead of passing them on to customers. If the trade war is more protracted, companies need to weigh longer-term strategies, such as establishing individual production in local markets, shifting production to non-tariff countries, or enacting gradual price increases or other cost-cutting measures to minimize the impact on market share and the bottom line.

For example, Swedish-based and Chinese-owned automaker Volvo Cars AB recently committed to opening an auto manufacturing plant in South Carolina to build cars for the U.S. and China markets. But due to tariffs, Volvo has hinted that it may no longer need as many workers as the 4,000 it committed to hiring by 2021.

“If you have trade barriers and restrictions, we cannot create as many jobs as we are planning to,” Volvo CEO Hakan Samuelsson told Reuters in June.

Harley-Davidson Inc., the Milwaukee-based motorcycle manufacturer, indicated it would move some production to Europe to avoid recently announced tariffs from the European Union.

But such seismic production shifts are expensive and difficult to execute. Companies with complex global supply chains, such as those in the automotive and value-added industrial sectors, are expected to suffer the most from a prolonged trade conflict.

Companies in sectors removed from tariffs, such as health care, communications, and technology, should be insulated. All three industries, according to their respective S&P sector indices, have outperformed the broader S&P 500 Index year-to-date.