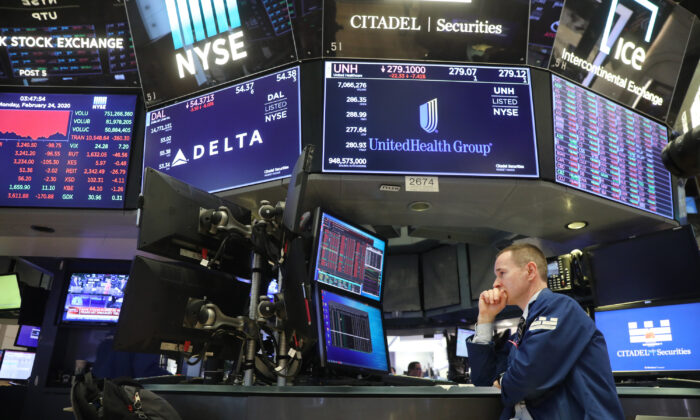 Traders work on the floor of the New York stock Exchange (NYSE) in New York City, U.S. on Feb. 24, 2020. Stocks fell over 1000 points on Monday as global concerns grow about the economic impact of the coronavirus. (Spencer Platt/Getty Images)
Markets

The Feb. 24 stock market plunge has been blamed on the coronavirus, but the SWIFT network that handles half of high-value cross-border payments issued a global liquidity warning prior to the crash.

Although early morning trading on Feb. 25 saw stocks rebound from their 4 percent losses in the prior day, shares plunged by over 3 percent by the end of New York trading. The Zero Hedge blog reported that Morgan Stanley had advised its clients that systematic selling from data-driven investment pools “could soar to $60 billion.”

The Society for Worldwide Interbank Financial Telecommunication (SWIFT) held ‘FX Day’ for its network of over 11,000 financial institutions from 200 countries and territories in London on Sept. 23. Its expert speakers warned that even though foreign exchange transaction volumes had dramatically increased in recent years, fewer banks were actually willing to take principal credit risk to provide market liquidity.

Moderator Gavin Wells stated that the annual Bank for International Settlements (BIS) global central banks survey found that transaction turnover, which has historically been identified as “a rough proxy for liquidity, was at an all-time high;” while the total amount of credit available to transactional markets (that had actually shrunk due to post-Global Financial Crisis reforms) require financial institutions to increase capital reserves.

Wells highlighted that a deeper inspection of the BIS 2019 foreign exchange (FX) survey data revealed that the “top five banks accounted for about half of daily turnover.” As a result, most banks in SWIFT’s network “now source liquidity for buy-side clients from other banks, rather than publish a firm bid and offer process of their own.”

The SWIFT concerns served as the antithesis of a Greenwich Analytics analysis titled “Diversifying Liquidity: Attaining Best Execution in FX Trading” that praised “a new wave of change in global FX trading” that allowed volume on multi-dealer trading platform volumes to jump by 32 percent since 2008, driving phone-trade volume down 50 percent. Greenwich trumpeted that advances in investor electronic trading of FX transactions “now accounts for 73 percent of volume executed annually.”

SWIFT argued that although this “recycling” of liquidity” powered a rapid expansion of transaction volumes over recently, such credit access concentration in the hands of just 5 providers could eventually lead to a rapid shrinkage of credit and a liquidity crisis.

UBS Strategic Development Lab leader Chris Purves told FX Day attendees that his bank had already implemented “watermarking technology” to identify counterparty banks that have been recycling UBS liquidity. Purves claimed: “That is absolutely necessary these days to understand how the market itself is working.”

SWIFT emphasized that well-funded hedge funds and other so-called non-bank liquidity providers (NBLPs) had not replaced the lost banking liquidity, because they are highly dependent on heavy bank borrowing to leverage their investment returns.

The BIS survey also found a 66 percent rise over the last three years in prime brokerage trading as evidence of greater NBLP activity. Given that most NBLPs investment strategies rely on the use of algorithms to sense and respond to small changes in streaming price feeds, SWIFT cautioned that NBLPs tend to magnify price movements and have the potential to cause markets to “flash-crash.”