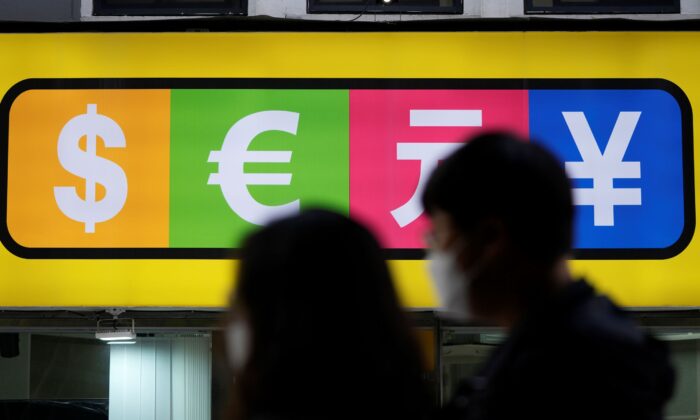 HONG KONG/LONDON—A share rally that has lifted stocks to record levels in recent days lost momentum on Friday, weighed down by renewed uncertainty over China’s property sector and as markets paused for breath ahead of U.S. jobs data due later in the day.

The U.S. dollar gained against sterling, which took a beating after the Bank of England (BoE) confounded markets by passing up a chance to raise interest rates on Thursday.

MSCI’s gauge of stocks across the world fell 0.07 percent, indicating a possible end to its four-day streak of record closing highs in a week in which central banks around the world refrained from hawkish surprises.

U.S. stocks futures pointed to confidence in the economic recovery expected to be shown by October payrolls data due later in the day, with S&P 500 e-minis up 0.05 percent.

The gains came even after the U.S. Federal Reserve on Wednesday finally announced that it would begin tapering its massive asset purchase programme, though Fed Chair Jerome Powell said he was in no rush to hike borrowing costs.

“Even though it transpired as expected, it is a significant milestone, the direction of travel is now clearly towards policy normalisation, though the Fed emphasised that tapering is not tightening,” said Stefan Hofer, chief investment strategist for LGT in Asia Pacific.

“It was really expert communication and very well handled.”

Hofer said U.S. jobs data would remain in focus in the coming months as that would influence upcoming decisions from the Fed.

In Asia, Hong Kong had weighed on the regional index, falling 1.25 percent as index heavyweight and rate-sensitive HSBC fell 3.6 percent following the BoE’s dovish call and anxiety over property stocks.

Trading in shares of Chinese developer Kaisa Group Holdings Ltd was suspended a day after the company said a subsidiary had missed a payment on a wealth management product, the latest sign of a deepening liquidity crisis in the Chinese property sector.

While investors were happy with the Fed’s communications, several felt that they had been misdirected by policymakers at the BoE.

On Friday, the pound was nursing its wounds near a month low having tumbled 1.36 percent the previous day following the central bank’s decision, which also roiled bonds in Britain and across Europe more broadly.

The dollar index last stood at 94.327, within sight of October’s 12-month highs, after the U.S. currency also gained ground on the euro.

Oil prices rose, staging a partial recovery after OPEC+ producers rebuffed a U.S. call to raise supply and instead maintained plans for a gradual return of output halted by the coronavirus pandemic.

U.S. crude gained 1.24 percent to $80 a barrel, while Brent crude rose 1 percent to $81.39 per barrel, above month lows hit a day earlier following a report that Saudi Arabia’s output would soon surpass 10 million barrels per day for the first time during the COVID-19 pandemic.

Spot gold tacked on 0.3 percent as the falling yields provided support to the non-interest bearing asset.

By Alun John and Lawrence White