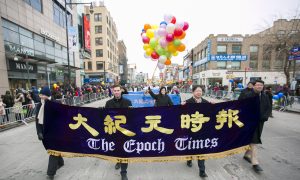 Barcelona, Spain: Alicia Crespo Alvarez, 41, Saleswoman: Barcelona is one of the cities where it is celebrated in a big way, because of the number of Chinese citizens living here. At home, they perform their traditions such as cleaning their home or business, throwing out old brushes, cleaning cutlery and glasses, putting away scissors and knives so as not to attract bad luck. They also perform a parade with dragons in the middle of the city. On the Chinese calendar, I would be born in the “Year of the Ox” and the year 2015 is represented as the year of the Goat, yin energy—a symbol of peace, social harmony, and tranquillity. It is the eighth sign of the Chinese calendar, which is a lucky number and of prosperity and peace, according to Chinese beliefs.
Global Q&A

Global Q&A: ‘How is Chinese New Year celebrated in your country?’

“How is Chinese New Year celebrated in your country?”

Look for the Global Q&A column every week. Epoch Times correspondents interview people around the world to learn about their lives and perspectives on local and global realities. Next week’s global question, “How can we ensure the world’s wildlife will survive in tandem with modern society?”