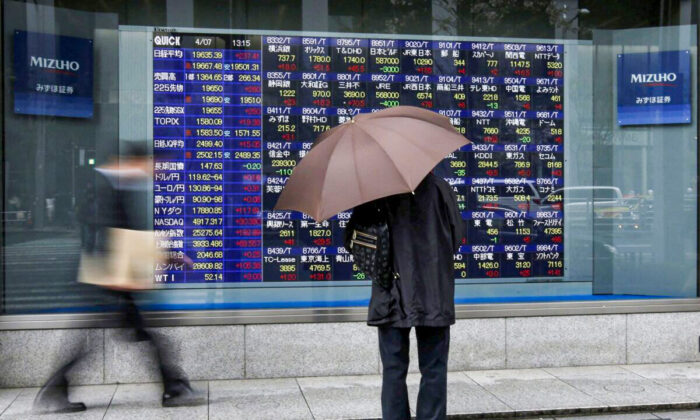 A man holding an umbrella looks at an electronic stock quotation board outside a brokerage in Tokyo, Japan, on April 7, 2015. (Issei Kato/Reuters)
Stocks

LONDON/SINGAPORE/TOKYO—Tentative calm returned to global markets on Wednesday, with the euro steadying after dropping to a two-decade low and oil back above $100 a barrel following a near 10 percent plunge a day earlier.

The single currency traded at $1.025, a fraction above its weakest level since late 2002 touched overnight as fears of a slowdown and rising commodity prices weighed.

Government bond yields across the euro area nudged up too, and European stocks also making gains, while Brent crude bounced almost 3 percent after slumping on Tuesday 9.5 percent to its lowest in 2–1/2 months.

The broad Euro STOXX 600 rose 1.9 percent, with indexes in Frankfurt and Paris up 1.7 percent and 1.9 percent respectively. Retail and travel and leisure stocks led the gains.

Nevertheless, fears over growth that have stalked markets in recent were lingering, investors said.

“The market moves over the past couple of days have been classic recessionary pricing,” said Hugh Gimber, global market strategist at J.P. Morgan Asset Management. “Investors are really becoming more cognisant of the risks.”

The dollar index was just off its overnight 20-year peak at 106.57, with safe havens in demand including the Japanese yen in demand.

The MSCI world equity index, which tracks shares in 50 countries, was up 0.1 percent. S&P 500 futures pointed to gains of about 0.3 percent on Wall Street.

Britain’s pound traded near a two-year dollar against the dollar as Prime Minister Boris Johnson clung to power, wounded by the resignation of ministers.

Brent crude futures rose almost 3 percent to $105.85 a barrel, with supply concerns returning to the fore even as worries about a global recession linger.

Uncertainty over Europe’s gas supply has led to the latest round of growth worries, sending prices rocketing. Benchmark Dutch gas prices have doubled since the middle of June.

Yet the Norwegian government on Tuesday intervened to end a strike in the petroleum sector that had cut oil and gas output, ending a stalemate that could have worsened Europe’s energy supply crunch.

Some investors worry that flow along the Nord Stream pipeline, which brings gas from Russia to Germany, might not resume after a ten-day maintenance shutdown from July 11 and that winter supply shortages will then prompt rationing and a sharp drop in economic activity.

The backdrop is rising interest rates.

The Federal Reserve publishes minutes later on Wednesday from the June meeting, where it announced the sharpest hike in the U.S. benchmark interest rate in nearly 30 years. It is likely to foreshadow more hikes as Fed officials have said their top priority is fighting inflation, even at the cost of growth.

“The probability of a soft landing had massively declined,” August Hatecke, the co-head of UBS Wealth Management Asia Pacific told investors at a conference in Singapore.