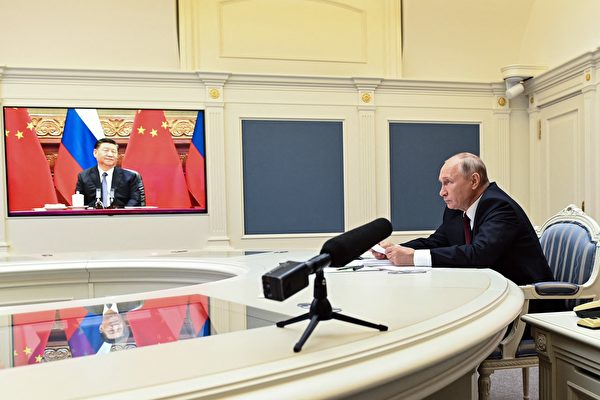 According to Chinese state media, Chinese leader Xi Jinping told his Russian counterpart Vladimir Putin, “We firmly support each other on issues concerning each other’s core interests and safeguarding the dignity of each country.” Xi was referring to Ukraine and Taiwan, two global flashpoints that have become intertwined.

U.S. security officials say that one of the plans that Moscow is considering is a false flag—a staged video, showing Ukraine attacking Russia, as a pretext for a Russian retaliation. If Russia invades Ukraine, the United States will impose sanctions, which may benefit China, both economically and politically. At the same time, the United States has deployed a nuclear submarine to Guam—to remind China to stay out of Taiwan.

Beijing has always condemned Washington’s harsh stance on Moscow. As a member of the United Nations Security Council, China sided with Russia, blocking U.N. action on Ukraine. Furthermore, China’s economic support for Russia is expected to undermine the impact of any future U.S. sanctions.

Ultimately, China benefits from this conflict in two ways: first, it drives Russia closer to China; and second, it distracts the Biden administration from addressing the Chinese regime’s aggression, such as incursions into Taiwanese waters and airspace.

When the United States brought sanctions against Russia in 2014, after its annexation of Crimea, Moscow turned to Beijing and both went ahead with a $400 billion gas deal. Trade between the two countries has steadily increased since. China is now a large purchaser of Russian weapons, fish, and timber. And in 2020, China became the primary importer of Russian crude and natural gas. Bilateral trade currently stands at $147 billion, more than double what it was in 2015.

Putin said that Russia and China will work together, “based on close and coinciding approaches to solving global and regional issues.” Putin said that he has not ruled out a military alliance and that the two nations would work together on space exploration and establishing a joint moon station. Beijing has also referred to the Ukraine issue as Moscow’s “legitimate security concern.”

On the other hand, the Russia-China alliance may not be as strong as the two leaders try to make it appear. Although China supports Russia with words and dollars, it is unclear if Beijing is willing to fall on its sword for Moscow. If China steps in to bolster the Russian economy, after U.S. sanctions, American authorities may hold Chinese banks accountable for violating the sanctions. It is not a given that Beijing is willing to accept such a hit on China’s economy when, instead, it could just continue to condemn the United States while not getting actively involved.

Russia and China have discussed forming an independent financial infrastructure, which would bypass the U.S. SWIFT system and eliminate the use of U.S. dollars for bilateral trade. Such a system, however, would be problematic, as neither country wishes to hold large quantities of the other’s currency. Even more, the system would also have to be adopted by European Union members in order to restore Russian trade. And this is very unlikely.

In spite of China seeking to soften the economic blow, which may be inflicted on Russia for annexing Ukraine, the Chinese Communist Party (CCP) has never officially sanctioned the annexation. Similarly, Russia has never supported China’s expansion in the South China Sea. In South Asia, the situation is even more extreme. Not only has Russia not supported China’s border claims against India, but Russia is India’s number one supplier of military hardware.

Additionally, although China and Russia have some security agreements in place, and they conduct joint training and patrols, they do not have any mutual defense pacts or a formal alliance. Consequently, experts believe it is unlikely that China would engage militarily to support Russia in a potential armed conflict with the United States or NATO.

Another issue for Russia is that turning to China will exacerbate the economic disparity between the two countries, as well as Russia’s dependence on a single country. Currently, China accounts for 18 percent of Russia’s trade. If the United States imposes sanctions, and Russia loses some of its trade with other nations, trade with China is likely to increase. As Russia only accounts for 2 percent of China’s trade, Russia is less important to China than China is to Russia. The sanctions would serve to increase China’s primacy.

The threat of economic sanctions may prevent China from aiding Russia in a Ukraine invasion. But sanctions will not necessarily prevent Russia from invading Ukraine or China from moving on Taiwan.

Michael Mazarr, a senior political scientist and expert on deterrence at the Rand Corp., said that the effectiveness of U.S. sanctions to bring other countries into line is very much dependent on the motive. If the Chinese regime’s goal is to annex Taiwan or Russia’s goal is to annex Ukraine, and there is no other reason for these actions, apart from gaining territory, then sanctions will not deter them.

If Russia’s goal were to annex Ukraine as a buffer against NATO, then a negotiated solution might be reachable. But if the real goal is imposing control over another country, then this is a zero-sum goal, with no room for negotiation or partial measures. Either these territories will be invaded and taken over, or they will not. There is no middle ground.

As Biden struggles to build a consensus among EU and NATO allies, Europe worries that Russia could cut off energy supply. If this happens, the United States has already said that it stands ready to help increase fuel shipments to Europe. The wildcard in an EU-U.S. alliance, however, is Germany.

Germany is one of Russia’s largest trading partners and stands to lose the most if the United States sanctions Russia, particularly if Washington removes Moscow from the SWIFT system, which allows for international trade payments. The rest of the EU members, particularly Britain, are ready to take a relatively firm stance. However, Germany has yet to commit.

In December 2021, President Joe Biden led the Summit for Democracy, which was specifically targeted at countering China, Russia, and other authoritarian regimes. The event was attended by leaders of more than 100 countries. Now, many of those democratic nations are staging a diplomatic boycott of the Winter Olympics. Putin, however, will be attending the Games, in person.

The Olympics are particularly symbolic on a number of levels. Beijing claims that the Games were meant to promote peace. And yet, during the 2008 Summer Olympics, Russia invaded Georgia and the CCP did not condemn the move. The invasion of Georgia and the potential invasion of Ukraine fly in the face of Beijing’s official position of non-interference in the internal affairs of other countries.

While the United States and the EU address the Ukraine issue, the Biden administration must still keep a close eye on the Chinese regime. In mid-January, the USS Nevada, a nuclear-armed submarine, received orders from the White House to make a port call in Guam, as a reminder to China that the U.S. military is close to its shores. The Nevada is an Ohio-class SSBN or nuclear-powered, ballistic missile-carrying submarine, which may be armed with as many as 20 Trident ballistic missiles.

The U.S. Pacific Fleet tweeted the arrival of the Nevada in Guam. As the location of the SSBN is generally classified, this gesture was clearly meant to send a very deliberate message to Beijing.