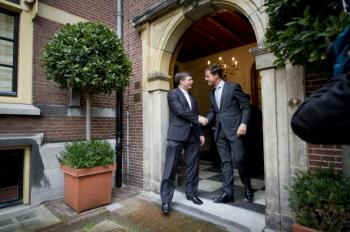 Prime Minister Mark Rutte says farewell to his predecessor Jan Peter Balkenende (L) on Oct. 14, 2010, at the doorstep of the prime ministers' office in The Hague. (Valerie Kuypers/AFP/Getty Images)
Opinion

WOERDEN—No longer the ideal of tolerance but “austerity measures” are the red thread that runs through the new Dutch government coalition agreement. “Everyone is going to feel it,” according to the new Dutch Prime Minister Mark Rutte.

“Feel it” will come to the tune of 18 billion euro, which the Dutch government plans to cut each year. For the common Dutchman, these cuts become an average loss of 200 euro a month per Dutch household, according to a survey of the ING economy office.

I think the hardening of society and politics is really destroying Dutch culture. We once believed in and were known for practicing tolerance. Tolerance was truly our national treasure, but now, in our efforts to protect our benefits, we are losing it.

It is not the prospect of austerity measures that concerns me so much as the populist attitude that reigns in contemporary Dutch society and politics.

I hear discontent aimed at immigrants who take advantage of our country while refusing to adapt; discontent about the millions of euros thrown into the bottomless pits of culture subsidy and development aid; and discontent about the systematic dismantling of our social welfare system, and of rich bankers cashing large bonuses while common workers are laid off. No good!

We have long passed the era of denial where one wouldn't dare make any kind of assumption about an ethnic or religious group for fear of being labeled racist. In the '70s, large numbers of guest workers from poorer countries were recruited to work in the industrial sector, cleaning services, and other manual jobs that require few qualifications. Instead of returning, however, many workers settled in the Netherlands and brought their families over. By now these people, and even more so their children, are Dutch people as much as I am.

In the '80s, the controversial politician Hans Janmaat touted the slogan "full is full." At the time Janmaat was treated with contempt by other politicians and labeled a neo-nazi. Nowadays, however, such statements are considered rather mild and are indeed very common.

It shouldn't be a problem to point out sensitive issues, but making frustration the sole driving force behind our domestic and foreign policies is asking for more trouble. I refuse to believe that Holland’s problems are as simple as we believe, and that we the people have nothing to do with them. Furthermore, sweeping measures will sweep away anything in its way.

It didn't come as a surprise that the new Cabinet announced a heavy cutback in spending on arts and culture since these are considered intangible things with a merely symbolic function, or even worse, artists are seen as parasites on society. Not that I am a fan of modern Dutch art, but I do believe that the classical arts should be protected.

Many Dutchmen, however, were less amused when the director of the Dutch Broadcasting Foundation said on national television that they are considering giving up the rights to broadcast Champions League soccer as a result of the austerity measures. Yes, soccer is also a part of our culture.

Many Dutch women were even less amused when the director added that a nationally televised, immensely popular matchmaking program called Farmer Looks for Wife might also be terminated. Uproar!

Before the Netherlands becomes too hard, we should heed the words of Mahatma Gandhi who said, “No culture can live, if it attempts to be exclusive.”

For my part, I will attempt to be tolerant and embrace our new government so that at the very least, this little bit of culture shall be preserved.