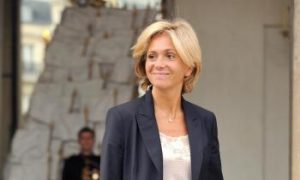 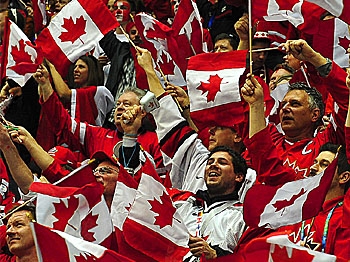 Canadian fans wave flags before the Men's preliminary Ice Hockey match Canada against USA at the XXI Winter Olympic games in Vancouver. At no other time or place would one see such overt patriotism from Canadians. (Luis Acosta/AFP/Getty Images)
Opinion

Matthew Little
biggersmaller
Print
In Canada we like our religion quiet and our French fries with gravy and cheese curds. We have a little piece of Europe wedged between Ontario and the Maritime provinces that speaks French, and it would rather be a country than a province according to the politicians it keeps electing.

We built a nation of immigrants by overrunning earlier nations of Aboriginal immigrants that beat Europeans here by 20,000 years or so.

Trying to write a column about Canada is like cherry picking. You find what’s ripe and put it at the top of the crate so the whole bunch of them looks juicy. Truth is, Canada is a bit boring, but let me strive to take some interesting factoids out of context just enough to make them truly tantalizing.

We have the highest immigration rates per capita in the world and half the people in our largest city, Toronto were born in another country. Our biggest cities could be any city in the world depending on what neighborhood you’re in: India, you got it. China, we have two. Scotland, oh yeah, Scotland is all over the place; they're sneaky though, they’ve learned how to hide the accent.

We make our own TV shows and movies, but prefer American ones. We are really into our famous musicians and movie stars, but most of them live in California. We've got a long list of superstars, but most people think they are American. Fortunately, there is an unwritten rule that whenever a conversation brings up one of these people, Canadians must note that they are Canadians.

"Did you see Avatar?"

"Yeah, James Cameron is a genius!"

Oh, and we don't really say "eh" that often, but it is funny to think others might think so.

We have a military and an arms industry that ranks in the top 15, but we're never really sure what our military is for. We used to be peacekeepers, but then we stopped buying new tanks and guns and couldn't do much. We've started buying stuff again, but the idea that we need stealth fighter jets to defend our own borders just sounds odd. The only country that’s ever invaded us was the United States but we were still a colony then and we beat them anyway.

We rarely sing the national anthem, and saying “God Bless Canada” sounds foreign. We play hockey, but it could be years before we see the Stanley Cup again because U.S. teams outnumber us five-to-one and they get most of our best players (but I have to point out that the NHL was founded in Canada). But we whooped them at the Olympics, an event of greater significance to many Canadians than, well, just about anything.

We like to think we are pretty smart and humble, which means we shouldn't say how smart we think we are, so forget what you just read, if you wouldn't mind.

We like to say “sorry,” but I'm not really sure if people here know what it means or what they are sorry about.

We're a young country, still figuring out what we are all about in many ways. The only time I ever saw naked, right-in-your-face patriotism here was during the Vancouver Olympics, and that was kind of surprising. People wearing Canadian flags spontaneously singing “Oh Canada” in the streets, mumbling through the paragraphs of the national anthem they were unsure of.

Oh, and we're pretty sure we invented the light bulb. Thomas Edison just bought the patent, so goes the legend. It's in Wikipedia, check it out. Oh, and look up poutine too.