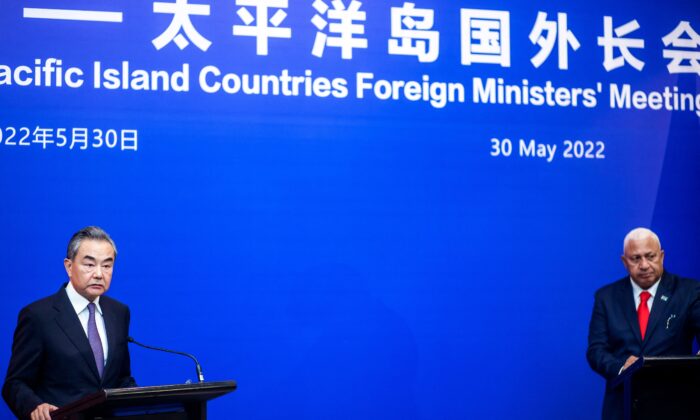 The global Inter-Parliamentary Alliance on China (IPAC) has announced a new forum to tackle Beijing’s ongoing influence in the South Pacific, including its contentious military security pact with the Solomon Islands.

IPAC was formed in 2020 following the outbreak of COVID-19 and is comprised of 200 MPs from 23 countries who seek to shape policy and discussion on the threat posed by the Chinese Communist Party (CCP).

The IPAC Indo-Pacific Forum will sit alongside existing forums, like the Pacific Islands Forum and the Asia-Pacific Parliamentary Forum, and will be one of the first dedicated platforms to deal with the “intensifying dynamics in the region” sparked by Beijing’s influence activities, which have capitalised on increasing instability in the region.

“The IPAC Indo-Pacific Forum will also enhance coordination in responding to China’s growing influence in the region, such as the recent security pact signed between the People’s Republic of China government and the Solomon Islands,” according to a statement to The Epoch Times. The move follows calls by defence expert Michael Shoebridge for IPAC to expand into the South Pacific.

Currently, legislators from Australia, New Zealand, India, and Japan are involved with the new Forum. However, the mid-term goal is to onboard MPs from South Korea, Taiwan, the Pacific Islands, and other democratic partners in the region.

“The fact that MPs from several Pacific nations are in the process of joining IPAC shows the seriousness in which they are taking the changing situation in the Pacific,” said Ingrid Leary, federal Labour Party MP in New Zealand and member of IPAC.

“We welcome their voices as being critically important to informing the alliance of their perspectives and insights, as well as how they wish other nation states respond to the intensifying dynamics in their region.”

Meanwhile, IPAC said bilateral security agreements, like the one between the Solomons and Beijing, was an example of the “divide and conquer” strategy being applied by the CCP to undermine regional groups like the Pacific Islands Forum.

“We, therefore, call on our governments to continue to make clear to the People’s Republic of China government—and any other government looking to involve themselves in our region—that any attempts to militarise the Pacific Islands are unwelcome and unacceptable,” IPAC said. “Democracies must stand together to uphold the peace and stability of the region.”

IPAC’s new Forum will need to move fast given the ongoing instability of democratic institutions across several Pacific nations—many of which incidentally have close ties to Beijing.

Loughman has faced pressure for months after attempting to change the nation’s Constitution to extend term limits from four to five years, and also to allow foreign nationals to hold office—there is a large population of Chinese nationals in the region.

A week earlier, three Tongan MPs were removed from Parliament after the country’s Court of Appeal found them guilty of bribing voters.

While Kiribati authorities attempted to deport Australian Judge David Lambourne, who serves on the high court of the Pacific nation, Lambourne is also the husband of opposition leader Tessie Lambourne, who he says faces pressure to quit politics.

The judge said there was “strong circumstantial evidence” that China policy was a defining factor for the government’s role in trying to deport him, given the opposition leader’s strong support for Taiwan.

Yet the ongoing political saga in the Solomon Islands has drawn the most attention, particularly after Prime Minister Manasseh Sogavare signed a security pact with Beijing that will allow Chinese weapons, police, troops, and naval ships to be stationed in the region—just 1,700 kilometres from the northern Australian city of Cairns.

The Solomons was also the site of extensive fighting during World War II’s Battle for Guadalcanal.

Sogavare has sought to soothe Western leaders with assurances that no military base will be established in the Solomons—despite emerging evidence of Beijing’s long-term military ambitions for the area.

Further, the prime minister has also deepened ties with Beijing while working to entrench his time in office.

On Aug. 8, the Sogavare government submitted a Bill to Parliament to delay the country’s election by six months under the pretext of not over-extending the country’s budget while it hosts the Pacific Games.

While on Aug. 18, the government announced a deal to take out a 448.9 million yuan (US$66.15 million) loan from the Chinese state-owned Export-Import Bank of China to fund the construction of 161 towers by contentious telecommunications giant Huawei—again under the pretext of supporting the Pacific Games.

The partnership with Huawei has triggered fears that the Solomons could be tied further into Beijing’s controversial Belt and Road Initiative and open up the country’s mobile and digital networks to privacy breaches. Huawei is banned from the 5G networks of several developed countries, including Australia, the United States, and the United Kingdom.