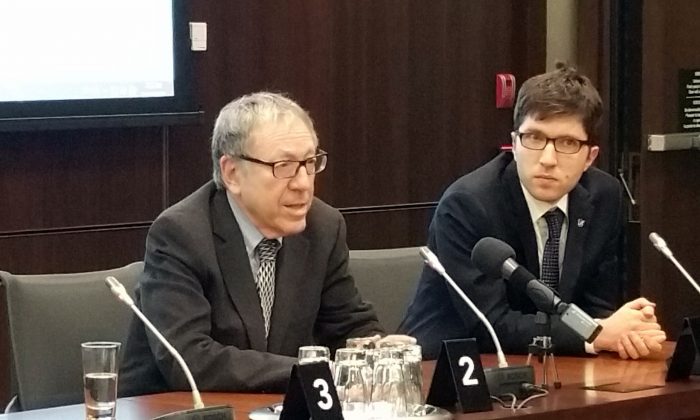 Former Liberal justice minister and attorney general Irwin Cotler and Conservative MP Garnett Genuis speak after the screening of “The Bleeding Edge” in Ottawa on April 4, 2017. Genuis and Cotler are among co-chairs of the recently formed Inter-Parliamentary Alliance on China. (The Epoch Times)
Canada

‘Standing Together’: Global Coalition Aims to Push Back Against Beijing’s Influence

A new global coalition formed by several countries including Canada will endeavour to counter what they say is the threat China’s growing influence poses to global trade, security, and human rights.

The Inter-Parliamentary Alliance on China (IPAC), announced on June 5, is composed of senior politicians from around the world including Canadian MP Garnett Genuis and former Canadian attorney general and justice minister Irwin Cotler.

The group’s stated mission is to increase collaboration between “like-minded legislators” to craft a “proactive and strategic approach” on issues related to China, according to its website.

“What we once believed about China’s rise no longer corresponds to reality,” says a video of several members introducing the coalition.

“We thought China would open up over time. This hasn’t happened. In fact, today China is authoritarian at home and ever more assertive abroad.”

“Maintaining the international order is all of our responsibilities … by standing together we will be able to keep the rules-based and human-rights systems true to their founding purposes,” says the IPAC video. “Then, and only then, will we rise to the challenge.”

The move by legislators is the latest in mounting international pushback against the Chinese regime, under scrutiny for its handling of the COVID-19 pandemic and increasingly aggressive international diplomacy.

Canada has been increasingly affected by Beijing’s strong-arm tactics in recent years, with restrictions placed on some Canadian goods and the detainment of Canadians Michael Spavor and Michael Kovrig after Canada arrested Huawei CFO Meng Wanzhou in Vancouver on an extradition request from U.S. authorities.

Other countries have also experienced retaliation for speaking out against Beijing.

Last month Australia saw Chinese tariffs imposed on some of its goods rise following its choice to investigate the origins of the virus outbreak. Chinese regime officials have also told major state-run agricultural companies to pause purchases of some American farm goods amid ongoing escalation of tensions with the United States over Hong Kong.

The coalition aims to push back against this type of hardball diplomacy from Beijing through strength in numbers, to counter the regime’s ability to isolate a single country for retaliation.

“When countries have stood up for democratic values and human rights, they have done so alone—sometimes at great cost,” the video says. “No country should have to shoulder this burden alone.”