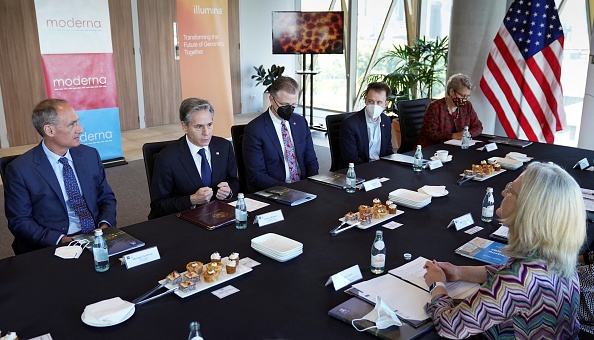 US Secretary of State Antony Blinken (2nd L) takes part in a health security partnerships roundtable at the Biomedical Precinct in Melbourne where the new global therapeutic centre will be based on Feb. 10, 2022. (Kevin Lamarque/Getty Images)
International

Global Centre to Create mRNA-Like Therapy for ‘Next Pandemic’

The Australian government has announced the establishment of a new therapeutic research centre in Melbourne to develop a drug breakthrough akin to mRNA vaccine technology for future pandemics.

The University of Melbourne, the benefactor, said the new centre would focus on rapidly developing, testing, and commercialising new treatments within months of a pandemic outbreak and plans to recruit international experts.

“If a therapeutic drug had been available at scale in July 2020, in line with COVID-19 vaccine approval, it could have prevented millions of deaths globally.”

“The centre will focus on research in emerging, high-potential molecular platforms and to develop new therapeutics with unprecedented speed,” Lewin said.

“We plan to do the hard work of basic science; new technologies that might one day be the mRNA of therapeutics.”

The initial focus will be on therapies to tackle coronaviruses and influenza, but researchers would seek to create “platform technologies” equivalent to mRNA.