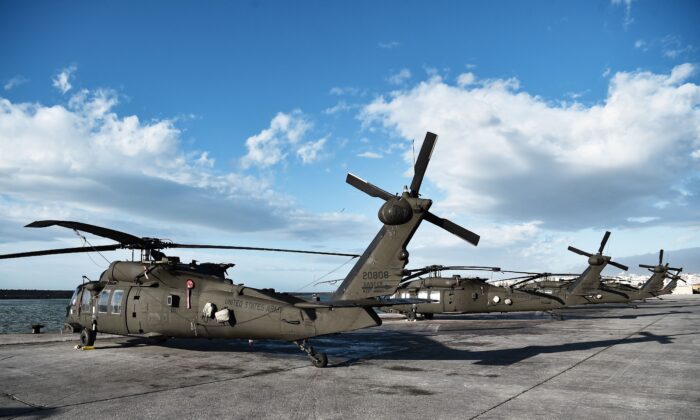 US Army helicopters are parked in the port of Alexandroupoli, Northern Greece, on December 3, 2021. (Photo by Sakis MITROLIDIS / AFP)
China

Arms sales continue to grow among the world’s top weapons manufacturers despite the shrunken global economy in 2020, with U.S. companies ranking first and Chinese second.

On Dec. 6, the Stockholm International Peace Research Institute (SIPRI) released the latest ranking of the world’s top 100 arms-producing and military services companies in terms of total arms sales. In 2020, total arms sales worldwide reached $554.6 billion, an increase of 2.5 percent from 2019.

U.S. arms companies remain the greatest in number on the world ranking list, holding 41 of the top 100 spots. The total arms sales of U.S. companies in 2020 amounted to $285 billion, accounting for 54 percent of the total sales worldwide, an increase of 1.9 percent from the previous year. Since 2019, U.S. companies have held the top five spots on the list.

Amid increased military threats from China and Russia, the United States has been increasing its investment in developing and procuring next-generation weapons systems, prompting a wave of mergers and acquisitions in the U.S. arms industry in recent years. As the trend continues, many U.S. arms companies hope to gain a competitive edge in contract bidding through broadening their product portfolios.

In 2015, SIPRI included Chinese military enterprises in its database for the first time. That same year, the total arms sales of the world’s top 100 weapons manufacturers saw a 14 percent increase. Since then, arms sales have continued to grow. The overall sales in 2020 saw a 17 percent increase over 2015.

Chinese companies make up the second-largest arms sales volume globally, reaching $66.7 billion in 2020, an increase of 4.5 percent from 2019. The sales growth of Chinese military enterprises in 2020 was nearly twice the average growth of all other nations on the list.

According to a 2021 report by the U.S. Department of Defense (pdf), the CCP’s national strategy aims to modernize and reform its military weapons and equipment. The plan includes building more military aircraft, aircraft carriers, guided-missile destroyers, various ballistic and cruise missiles, as well as a large amount of land-based equipment such as tanks, armored vehicles, and artilleries.

China’s GDP grew only 2.3 percent in 2020 due to the COVID-19 pandemic. Despite the low economic growth and high government debt, the CCP increased its defense budget by 6.8 percent in 2021, reaching nearly $210 billion, and plans to maintain a robust upgrading of its armed forces in the future, according to a report from the Associated Press.

A study published in June by RAND Corporation, a U.S. think tank, suggested that China’s ambitious military modernization could soon challenge U.S. global leadership; and that the CCP’s military expansion in recent years has become a “pacing threat” to U.S. military operations in Aisa and beyond.

China made most of its technological progress through intellectual property theft and the acquisition and merger of foreign companies with advanced technology.

China has a long history of stealing U.S. technology secrets. It is not a “competition” between powers as President Joe Biden suggests, but a deliberate and serious violation of U.S. intellectual property rights (IPR) by the CCP. The Chinese intellectual property theft was evident and worsened during the Obama era. Beijing even incorporated such thefts, including the Thousand Talents Program, into its strategies for China’s economic rise and world dominance.

Since 2015, only five Chinese arms companies have been listed in SIPRI’s top 100 yearly rankings. However, SIPRI stated that other Chinese companies might have arms sales high enough to rank among the top 100, but they were not included due to insufficient open-source data, suggesting the actual Chinese arms sales are far greater than the published data.

Although these Chinese companies appear relatively large scale and maintained growth overall, they contribute very little to China’s overall economy. The arms sales are primarily domestic, and exports are negligible.

For example, even though Norinco holds a major position among the CCP’s military enterprises, it does not produce cutting-edge weaponry. Instead, Norinco produces primarily standard land-based military equipment.

Likewise, AVIC’s yearly sales growth was 0.8 percent and 1.6 percent in 2019 and 2020, respectively, indicating slow growth in its high-end aviation military equipment production. The companies’ advanced military aircraft production is unlikely to have reached the production scale desired by the Chinese regime.

Stephen Xia
Follow
Stephen Xia, a former PLA engineer, specialized in aviation equipment and engineering technology management. After retiring from military service, he has been following the world's development of military equipment.