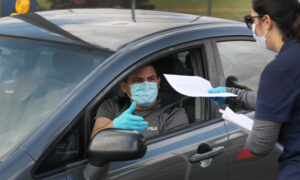 Conservative radio and television show host Glenn Beck (L) gestures to an image of New York Mayor Michael Bloomberg during Beck's keynote address at the National Rifle Association convention in Houston, Texas, on May 4, 2013. (Screenshot/ABC)
US

Conservative television and radio show host Glenn Beck gave a keynote address at the National Rifle Association (NRA) convention on May 4, in which he made a joke about New York Mayor Michael Bloomberg that raised eyebrows.

“When somebody argues for gun control, they are either living in self-imposed ignorance, or they are just living an argument of control,” Beck said in a recording of the address on ABC‘s website. Along with Bloomberg’s tough stance on guns, Beck mentioned New York’s soda ban, regulations to combat high salt intake, and more.

Beck said on his radio show Tuesday that the image was meant to resemble a famous photograph of Russian communist Vladimir Lenin in a similar pose.

“That’s clearly not Nazi imagery,” Beck said. “I’m sorry this looks to you like Adolf Hitler,” he said, targeting ABC in particular, but also many other media outlets.

He noted Lenin and other communist leaders “also killed a lot of people.”

The Jewish group Anti-Defamation League (ADL) had called for an apology following the NRA convention—and it’s not the first time Beck has offended ADL members.

A statement released by the group said Beck’s comments were “deeply offensive on so many levels,” according to ABC.

Beck’s comments are recorded in a statement on ADL’s website. On April 30, 2007, Beck said on his radio show: “Al Gore’s not going to be rounding up Jews and exterminating them. It is the same tactic, however, the goal is different. The goal is globalization. The goal is global carbon tax. The goal is the United Nations running the world.”

“Glenn Beck’s linkage of Hitler’s plan to round up and exterminate Jews with Al Gore’s efforts to raise awareness of global warming is outrageous, insensitive and deeply offensive,” said ADL national director and Holocaust survivor Abraham H. Foxman in a statement.

ADL understood his comments as blaming the Jews for Jesus’ death.

Beck sent ADL an apology and explanation, saying he believes the Romans were responsible for the crucifixion and he only meant to draw attention to the view some people have of Jewish guilt.

“While as a non-Jew, I can never fully understand the suffering that has resulted from the historically inaccurate deicide charge,” Beck said, “as someone with German heritage, I recognize the horrors that have been perpetrated on Jews throughout history and have asked if my ancestors knew what was taking place and looked the other way or how they could not have known of the horrors taking place.”

ADL thanked Beck for his clarification.

In it’s 2007 comment on Beck’s Gore-Hitler comparison, ADL expressed concern at the “troubling epidemic on the airwaves, where comparisons to Hitler and the Holocaust are becoming all-too facile.”