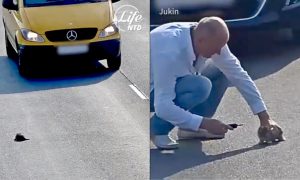 A video has gone viral online of a USC student going around the university campus and handing out roses to strangers he meet on Valentines Day.

At the beginning of the video the student introduces himself to the camera before we see a montage of shots of him handing out the red flowers to both male and female students that he meets.

In one shot he hands a rose to one unsuspecting woman and explains that he’s giving it to her because she is pretty. In another he hands a rose to a woman who is pushing a pram and has a baby in her arms. He even takes the time to stop a few male students and older people who don’t even go to the school.

One student takes a rose whilst cycling past without even slowing down and rides off in a blur past the camera. The intrepid student even cajoles one lady into giving him a kiss on the cheek in exchange for a flower which she duly does.

But the purpose of handing out the roses isn’t just so the people who get them can feel appreciated. Later in the video the student explains to the camera that what he wanted to do was get the recipients to pass on the gift he has given to them to people they care about so the love can be shared.

We see our generous gift-giver then explain to some of the rose recipients that he is filming them for a video on YouTube and he asks them if they will go on and share the love by passing the rose they have to someone else, which they duly do.