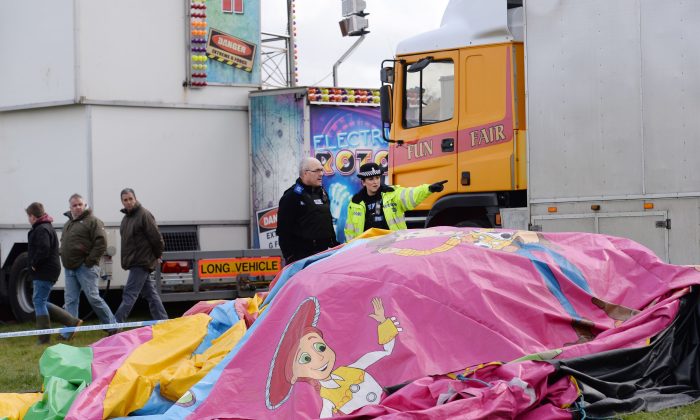 Police and forensic officers attend the scene Sunday, March 27, 2016, where a seven-year old girl died after she was blown by the wind about 150 metres on a bouncy castle on Saturday. The children's bouncy castle is thought to have been swept away by a gust of wind as families gathered for an Easter fair, over the long holiday weekend. (Stefan Rousseau/PA via AP)
UK

Two arrests have been made in Britain after a seven-year-old girl died while using a bouncy castle at an Easter fair, which was organized by Thurston funfairs.

Girl, 7, Killed After Being Struck by Hit-and-Run Driver

Summer Grant was playing on the inflatable castle when a sudden gust of wind turned the castle over. She was treated at the scene and airlifted to hospital where she later died.

The death of Summer Grant has raised the question of whether inflatable castles should be banned altogether.

The castle was located in Harlow Town Park, 30 miles north of London.

“It was a sudden gust. Had it been a consistent wind they would have closed down all the inflatables,” Ray Smith, a representative of the Showmans Guild of Great Britain, told the Guardian.

“I know the [Thurston] family and I am very confident they had staked it out properly. Obviously there is a full investigation to be held into how this could have happened and to make sure it can never ever happen again.”

Last year an inflatable castle operated in the same park collapsed, and three children had to be treated by paramedics. The death of Summer Grant has raised the question of whether inflatable castles should be banned altogether.

“I will be asking the relevant authorities to start an urgent inquiry as to how this tragedy happened, and to find out who is responsible, especially given [the] events last year, and to consider whether bouncy castles such as this should be banned from Harlow Town fairs, until we can be sure that they are completely safe, so such a horrific tragedy never happens again,” said the Member of Parliament for the district, Robert Halfon.