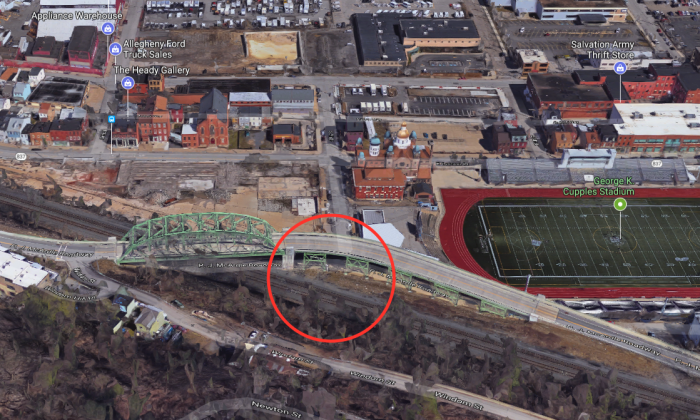 The approximate location where Lindsey Michaels was killed in a train accident in Pittsburgh on Sept. 3, 2017. (Screenshot via Google Maps)
US

A girl lost her life after she fell on the tracks while hopping a freight train early Sunday morning, Sept. 3, in Pittsburgh.

Lindsey Michaels, 21, of Dormont, Pennsylvania, was out with her boyfriend when they decided to hop a 130-car freight train moving slowly along the South Side Flats neighborhood around 2:30 a.m.

Michaels fell onto the tracks and was dragged, WTAE reported. Her boyfriend suffered an ankle injury.

The couple went to a Pitt Panthers game, attended a cookout, and drank alcohol that day, before going to the South Side area of the city, Michaels’s mother said.

Michaels was a graduate of Keystone Oaks High School and a junior at Carlow University. She was on the dean’s list studying biology.

“The train, moving 130 cars loaded with coal, was traveling at about 3 to 4 mph through this area and then began to pick up speed. The train crew did not see anyone trying to jump on the train and was not aware that anyone might have been hit.”

“The Carlow University community extends its deepest sympathy to the family and friends of Carlow junior Lindsey Michaels, who died last night in a tragic accident on the South Side. We mourn her loss. Information about a memorial service on campus will be forthcoming. Our thoughts and prayers are with her loved ones.”

Lexy Mercurie was a childhood friend of Michaels. “We were just always really good friends. I was like a couple streets down. I walked to her house every day. It was like the same routine all the time,” she said.

They attended high school together, went to the same university, and even shared a room there for the first two years.

“She always just lived in the moment and she always wanted to have fun. I don’t think they expected anything like that to ever happen, you know?” Mercurie said.

Freight-hopping used to be a way for migrant workers to travel the country in the 19th and early 20th century. Yet trespassing on a private railroad is illegal.