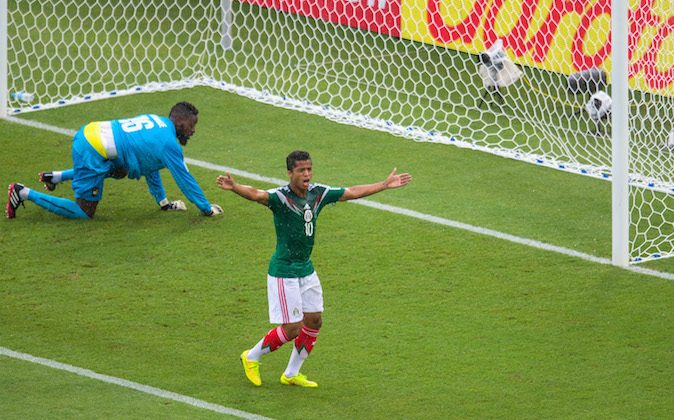 Giovani dos Santos of Mexico reacts as his goal is disallowed during the 2014 FIFA World Cup Brazil Group A match between Mexico and Cameroon at Estadio das Dunas on June 13, 2014 in Natal, Brazil. (Miguel Tovar/Getty Images)
Soccer

Giovani dos Santos: Will Villareal Forward Show Up Against Brazil?

Mexican striker Giovani dos Santos will likely be in the starting line-up to face Brazil, but can he replicate his opening game form?

The 25-year-old forward, who plies his trade in La Liga side Villareal FC, had an outstanding game against Cameroon, finding the back of the net twice, only to be ruled offside. Video replays have since showed that dos Santos was wrongly penalized.

Highly-rated as a youth — he was voted the second best player of the U-17 World Cup, which Mexico won, and was in Barcelona’s famous La Masia academy — dos Santos hardly looked like fulfilling his potential in subsequent years.

Dos Santos would play for Tottenham Hotspur, where his career suffered, and was later sent on loans to Ipswich and Galatasaray.

Eventually, he would move to Real Mallorca in August 2012, and later make a permanent move to Villarreal in July 2013.

It was at Villareal that dos Santos’ career picked up, and it was largely because manager Marcelino Garcia Toral chose to play him in a central role.

” I believe I know where the position he can give most is and in which he feels most comfortable,” said Garcia Toral in a press conference.

“Giovani is a second striker or a (No.) 9 if you play very defensively.”

The Mexican striker would go on to notch 12 goals and 8 assists in all competitions in the 2013-2014 season, and hence proving Toral right.

A player on the rise, Dos Santos will certainly be looking to reproduce his goal-scoring touch against World Cup 2014 hosts Brazil today.

Check out an Associated Press article on video replay technology.

The head of World Cup broadcast operations on Sunday said the technology is already there to do it whenever FIFA wants to change the rules.

Twice the images suggested Mexico was wrongly denied first-half goals in its 1-0 win over Cameroon on Friday.

Viewers see a freeze-frame shot with a pitch-wide line to measure the attacking player’s position against defenders. It is done by a production technician working in the broadcaster compound adjoining each of the 12 stadiums in Brazil.

“There is a specific operator only doing that,” Tellier told reporters on the sidelines of a FIFA briefing on World Cup broadcasting. “The operators are super well trained for that. He is adjusting the line and they are very experienced in it.”

Previously, FIFA’s long-standing opposition to helping referees with video technology meant such images were only part of the TV show and not the action.

Goal-line technology is debuting at this World Cup after FIFA President Sepp Blatter changed his mind on seeing England’s Frank Lampard have a goal not allowed four years ago in South Africa.

That would bring football into line with tennis, the NFL and Major League Baseball.

Tellier said football would not be the first sport to use video review when ruling on offside calls.

“It could be possible as it is in sports like rugby, but now it’s forbidden,” he said.

Any change to the laws of football must be discussed, trialed and approved at annual meetings of FIFA’s rules panel, the International Football Association Board.

Blatter and UEFA President Michel Platini, who is an outspoken critic of any video review, have both defended keeping a human element in decision making.

Tellier acknowledged that the current offside analysis could not be perfect.

“It’s still a human being … under time pressure,” he said. “If you send it too fast then there is a risk that you make a mistake.”