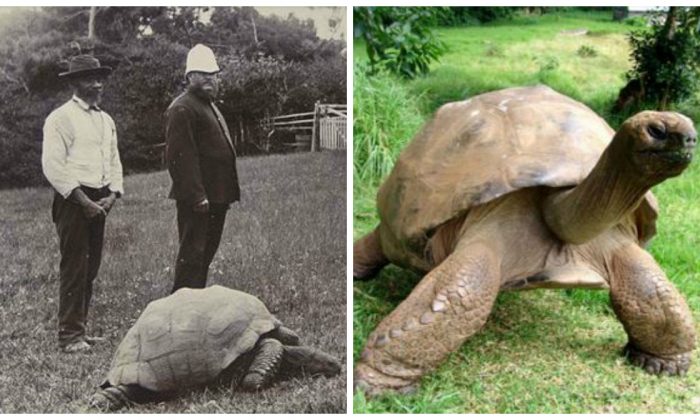 The oldest living animal in the world has enjoyed better health since a veterinarian put him on a high-calorie diet featuring lots of fruits and vegetables.

Jonathan, a 183-year-old giant Seychelles tortoise, has lived on St. Helena Island since 1882 after being moved from his birthplace in the Seychelles.

Prior to the diet change, it was feared he would die soon given his loss of eyesight and sense of smell.

World’s oldest (confirmed) living animal, Jonathan the Tortoise…at the age of 183!His health was getting bad and eyes…

WOW! He’s definitely not living life in the fast lane! Jonathan, a giant Seychelles tortoise, was put on a high-calorie…

Now Hollins believes Jonathan has a good chance of reaching 200.

“Jonathan has become almost completely blind due to cataracts and has lost his sense of smell. He was just grabbing at food and ended up chomping on twigs which blunted his beak. He lost weight because of his nutritional deficiencies,” Hollins explained to the Daily Mail.

“I changed his diet and started to give him a mixed bowl of fruit and vegetables like apples, carrots, lettuce, guavas, and bananas which are very high in calories. Since then his life has been transformed. He has put on weight and is a lot more active and is walking more than he used to. He has more fat cover which will help him in the winter and has good nail growth. The life expectancy of a giant tortoise is 150 but there is no reason why Jonathan won’t still be here after we have all gone.”

The island’s officials and Hollins, though, have already put in place a plan for when the tortoise does finally pass.

According to the BBC, his shell will be preserved and go on display in St. Helena.