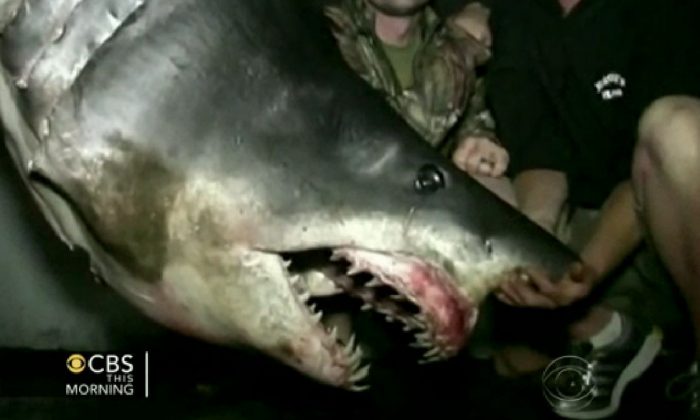 Giant Shark: A 1,323.5-pound mako shark caught off the coast of California on Monday by fishermen on the reality TV series The Professionals has broken a world record for the largest of its kind caught.

“That thing was a true killing machine,” said Jason Johnston, who caught the shark, told CBS This Morning. “When it came in, the jaws on it … it was traveling 50 miles an hour.” He spent two hours wrestling to get it. He compared it to being tied to a Volkswagen for hours.

Corey Knowlton, a crew member, told CBS, “This one came up wanting to kill every single thing in its sight.” He said it was chomping all around.

The crew celebrated, but director of conservancy group Shark Steward David MacGuire spoke of the ecological impacts of shark fishing. Since sharks are the top of the ocean food chain, the shark population must be protected because its depletion will affect all others, he explained to NBC News.

“The females come in to South California to give birth. I think the significance is that it takes about 15–18 years for these sharks to be able to give birth,” he said. “There are very few young. They only live to about 30–32 years and it takes three years between pregnancies.”