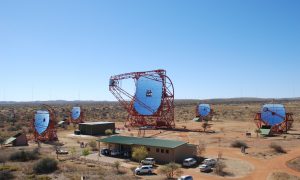 Think of it as a beautiful full-moon or think of it as an alien ship hypnotically spinning over a wintry river landscape. From certain angles, it may appear like a celestial body staring from across some distant corner of our galaxy. But this giant rotating disk is nothing you may be thinking!

It’s a rare and natural phenomenon; a giant rotating disc of ice about 100 yards in diameter that has appeared on Presumpscot River in the city of Westbrook, Maine, in the United States.

“There were a bunch of seagulls [sitting] right in the middle and a lot of pigeons on the edge,” said Scott Brown, a resident of the city who visited the site on the afternoon of Jan. 16.

“I had to be there, absolutely. It was a beautiful day,” he said.