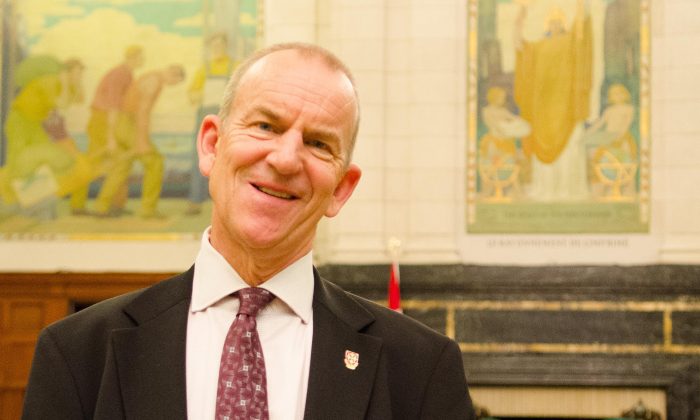 George Smith, now a professor at Queen's University, negotiated over 100 collective agreements before retiring from the public sector. He ended that earlier career as senior vice-president at CBC/Radio-Canada. (Matthew Little/The Epoch Times)
Canada

Getting Tough With Unions Could Backfire

The Harper government’s attempt to rein in public sector unions could blow up in its face, according to experts on both sides of the bargaining table.

Treasury Board, which controls the government money purse, wants a seat at the table when Crown corporations negotiate with their respective unions, but that’s a move that could shatter delicate discussions and keep parties from coming to agreements, says George Smith, a former negotiator who faced off with unions in over 100 collective agreements.

And with the Conservative government’s record of legislating unions back to work, standoffs could mount, leading to a rise in work stoppages and labour unrest.

Smith lauds the government’s effort to get costs under control at Crown corporations and push for better performance, but derides the idea that government can get directly involved.

Normally, a Crown corporation’s management negotiates with its union to come up with a deal that works with both parties. The problem, according to critics, is that both sides know taxpayers are picking up the tab, so unions get better deals than similar businesses in the private sector.

That leaves some, including Fair Pensions for All, a group that advocates against public sector pensions, feeling the system leaves taxpayers paying for benefits that few will ever see in their own private sector jobs.

Top among those are defined benefits pension plans, which guarantee payouts regardless of how pension investments might have fared. Private sector companies regularly offer defined contribution plans, which guarantee the company will put in a certain amount of money. But if markets collapse, as they did in the 2008 global downturn, workers will see their pensions decline and may need to work longer to recoup the losses.

The group estimates that there are at least 8 Crown corporations out of a total 48 facing nearly $9 billion in pension shortfalls—even after billions in government top-ups.

But the problem can’t be fixed by Treasury Board trying to intervene in union negotiations, said Smith.

“Unions will object to it, management will be compromised, and those bargaining tables are going to be very, very awkward with a representative of Treasury Board that nobody wants there.”

Smith was among several witnesses who have testified before the parliament’s finance committee on the provisions—few of whom thought they were a good idea. Of those who did, their focus was largely on the fact that public sector unions, including those at crown corporations, receive benefits that are more generous than the private sector.

That, combined with endemic underperformance in the public sector—a topic of endless derision among private companies that work with the government—has made the Conservatives pursue bold reforms. But bringing Treasury Board to the bargaining table could be a disaster, said Smith.

“My question is what happens the first time one of these Treasury Board representatives goes to one of these bargaining tables and the union says, ‘We’re not meeting with you. We’re not even going to have the meeting.’ I think that’s entirely possible.”

Rather than a mathematical process of exchanging sheets of numbers, negotiating a collective agreement is a highly emotional process, said Smith, and something those who’ve never done it cannot easily understand.

“It’s much more behavioural than it is scientific. There is a rapport that develops between chief negotiators—nods and winks—and often the chief negotiators are closer to each other than they are to their respective teams.”

Smith says the figures written on paper often come secondary to the relationship dynamic that plays out.

“Collective bargaining is intense interpersonal behavioural drama. Often there is an intimacy to it, even though the parties are clearly from different sides of the table.”

Those negotiators rely on each other, he said, because each knows they can’t win unless the other side also wins. While many union witnesses raised that point in committee also, Smith was one of the few speaking from a management perspective to suggest the proposed changes could wreak havoc on negotiations.

“It’s not just about plunking something on the table and saying ‘take it or leave it.’ That’s the easiest way for it not to work,” said Smith, adding that this is effectively what the government is doing.

By having Treasury Board at the table, management has the full weight of government behind them and pressure to act accordingly.

“What this government is doing is creating a situation where a Crown corporation would go to the unions and say, ‘Take it or leave it and by the way we have the government behind us.’ Well, you know what the answer to that is going to be: ‘leave it,’ and it’s going to be ‘leave it’ in spades. And then what is going to happen?”

One likely possibility is the government could legislate unions back to work, something it has done with Canada Post, CP Rail, and Air Canada. If that becomes a pattern, there is a possibility unions could fight back and Canada could see larger labour disruptions, say union leaders.