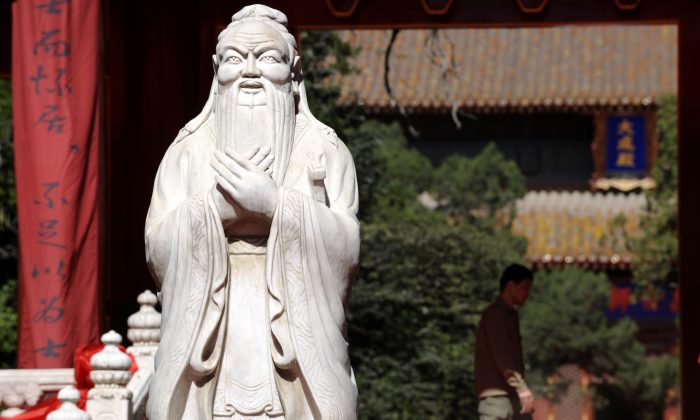 A man walks beside the statue of Confucius at the Confucius Temple in Beijing, China, on Sept. 28, 2010. (Liu Jin/AFP/Getty Images)
Europe

Germany’s University of Trier to Suspend Its Confucius Institute

The German University of Trier will suspend all activities of the Beijing-controlled Confucius Institute (CI) on its campus, coming after the Chinese Communist Party (CCP) sanctioned European agencies and individuals who expressed support for oppressed Uyghurs in China’s Xinjiang Province.

The university in a recent statement expressed concern over recent steps taken by the Chinese regime “to restrict freedom by imposing sanctions on numerous scholars throughout Europe and also on the Mercator Institute for China Studies (MERICS).”

“The freedom of research and teaching is an invaluable asset,” the statement read. “The Basic Law of the Federal Republic of Germany explicitly emphasizes this freedom in Article 5.”

The university described its decision to suspend the operation of its partnering CI as “a sign of protest and solidarity towards colleagues at home and abroad who are affected by the sanctions.”

The four organizations targeted by the CCP are the Political and Security Committee of the Council of the European Union, the Subcommittee on Human Rights of the European Parliament, the Mercator Institute for China Studies (MERICS) in Germany, and the Alliance of Democracies Foundation (AoD) in Denmark.

“We will never give in to bullying by authoritarian states,” said AoD Founder Anders Fogh Rasmussen in a March 22 response to the sanctions. “Our work to promote freedom, democracy and human rights around the world will continue.”

He added that China’s recent move has “once again highlighted the urgent need for democracies to join hands in stemming the tide of autocracy in the world.”

Controversy remains around the network of CIs because they are overseen by the CCP’s Ministry of Education.

The institutes are accused of restricting freedom of speech and research by excluding sensitive topics like human rights and religious beliefs. They are also committing discrimination in recruitment policies, according to Doris Liu, an independent filmmaker and journalist. Therefore, they have been met with growing resistance in many democratic countries.

In June 2014, the American Association of University Professors (AAUP) issued a statement urging American universities to cease their collaboration with the CI unless the universities can have unilateral control of the academic affairs, that the teachers in CIs can have the same academic freedom enjoyed by other university faculty members, and that the agreements between universities and CIs are available to the community.

The AAUP statement was widely picked up by U.S. media and prompted extensive debate in the United States.

As of late March, 74 CIs in the United States have been closed or were in the process of closing, according to a report by the U.S. National Association of Scholars (NAS). Of the 50 remaining CIs in the country, eight were scheduled to close, the report said.

Liu told The Epoch Times on April 12 that “the move marks a trend of the world scrapping Confucius Institutes.”

She noted that the CCP’s CIs are far more than language or culture teaching agencies.

“Though we can’t say all faculty working for them are CCP spies, they are indeed a tool of the United Front and are working in the CCP’s interests via social networking in the West.”

Liu also revealed that intelligence agencies in multiple countries have reported CI faculty members to their governments for their suspected activities.

Liu’s documentary, In the Name of Confucius, focuses on the CCP’s influence seeping into Western colleges and universities. The film has been published in 12 languages and released in around 20 countries.

Liu also warned that given the current influence of the CCP on foreign campuses, democracies should guard against its infiltration through other channels, even if CIs are officially cancelled.