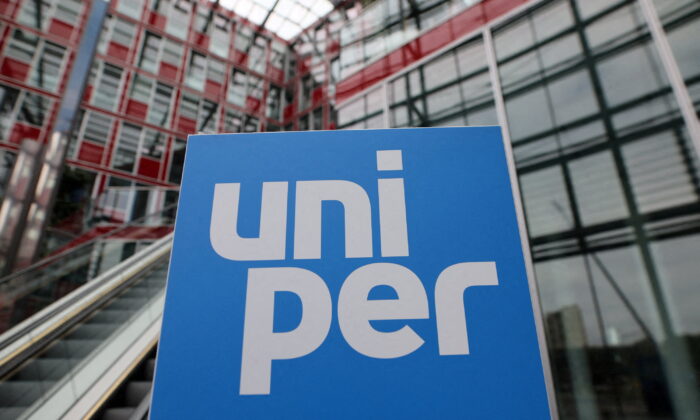 The Uniper logo in front of the utility's firm headquarters in Duesseldorf, Germany, on July 8, 2022. (Wolfgang Rattay/Reuters)
Europe

FRANKFURT/HELSINKI/BERLIN—The German government stepped in to rescue Uniper with a 15 billion euro ($15.28 billion) bailout on Friday after the gas importer became the biggest casualty of Europe’s energy standoff with Russia so far.

Under a bailout that is among the biggest in German corporate history, the government will take a 30 percent stake in Uniper, reducing the ownership of its Finnish parent Fortum to 56 percent from nearly 80 percent after weeks of tough negotiations.

It will also allow Uniper to start passing on some of the costs of soaring gas prices to consumers in the coming months, which German Chancellor Olaf Scholz said would be offset by more welfare support to shield poorer households.

The bailout underscored how Russia’s invasion of Ukraine in February has major implications for governments across Europe as they grapple with soaring energy costs and fears of acute gas shortages over the peak demand winter months.

“We are living through an unprecedented energy crisis that requires robust measures,” Fortum CEO Markus Rauramo said, adding the deal reflected the interests of all parties. “We were driven by urgency and the need to protect Europe’s security of supply in a time of war.”

At a news conference, Scholz asked the country to pull together, invoking the popular song lyric “you’ll never walk alone” in English, while announcing the Uniper bailout.

Under the agreement, Germany will buy 157 million new ordinary Uniper shares for 267 million euros and make available capital of up to 7.7 billion against issuance of mandatory convertible instruments.

In addition, state-lender KfW will raise an existing credit line by 7 billion euros to 9 billion in total.

Scholz, who broke off his holiday in southern Germany to finalize the bailout, said the government would eventually relinquish its stake.

The package needs approval from the European Commission, and requires confirmation of Uniper’s investment grade rating by agency S&P. The deal also needs the backing of Uniper shareholders.

It carries certain conditions, including that Uniper withdraws a lawsuit against the Netherlands over its coal phase-out as well as a commitment by the Duesseldorf-based group to suspend dividend payments for the duration of its stabilization period.

Following the rescue, Uniper, Fortum, and the German government will work on a long-term solution to reform the company’s wholesale gas contract architecture, which has exposed the group to billions in losses.

The parties intend to agree on the longer-term solution by the end of 2023, they said.

Germany has accused Russia of deliberately strangling gas flows to Europe on spurious pretexts in retaliation for Western sanctions after the invasion of Ukraine. Moscow denies doing so and said it is ready to fulfill all its commercial obligations.

Germany’s largest importer of Russian gas, Uniper on Friday signaled it would take legal action against Gazprom after the Russian company retroactively claimed force majeure for past and current shortfalls in deliveries.

“To date, we have already suffered billions in damages and there is no end in sight. Gazprom itself has not shown any willingness to pay for even part of the damage,” Uniper Chief Executive Klaus-Dieter Maubach told journalists.

A drop in Russian supplies meant that, rather than being able to rely on long-term price agreements, Uniper had to buy expensive gas on the spot market to make up for the shortfall.

Fortum’s Rauramo said it was too early to estimate what the total losses for Uniper and Fortum would be as these depended on the price and quantity of Russian gas to Europe.

Fortum and the German government have agreed that Germany will cover 90 percent of price increases which means Fortum would need to cover the rest.

Germany has said that utilities risk a similar collapse to that of Lehman Brothers, whose demise helped trigger the 2008 financial crisis. Scholz compared Friday’s rescue to former European Central Bank (ECB) chief Mario Draghi’s famous promise to do “whatever it takes” to save the euro.

“We will do everything necessary that we can together as a country, as companies, as citizens, to get through this situation so that nobody is put in an impossible situation,” he said.