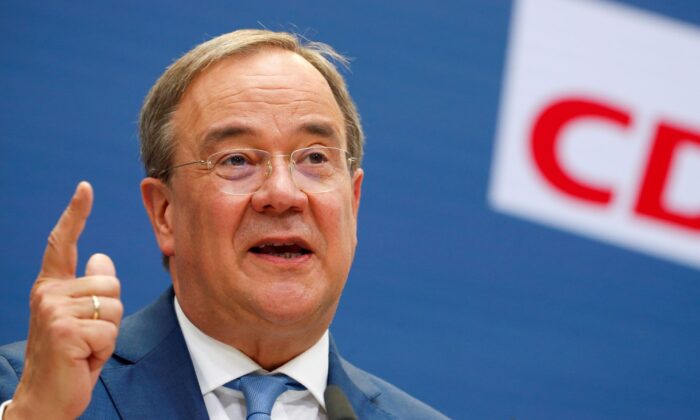 “I’m sure the ECB will particularly fulfil its core task of monetary stability … But this also means that when interest rates rise again the debt burden becomes an even bigger problem for the state,” he said in Saturday’s edition.

Laschet’s remarks a week ahead of the Sept. 26 general election stand in contrast to comments made by his key expert for fiscal and economic policies Friedrich Merz, who this week lashed out at the ECB’s loose monetary policy.

The ECB said this month it would trim emergency bond purchases over the coming quarter, marking a first small step towards unwinding the emergency aid that has propped up the euro zone economy during the coronavirus pandemic.

The latest German election poll, provided by Ipsos, puts the conservative CDU/CSU bloc at 21 percent and the Social Democrats (SPD) at 27 percent, piling pressure on Laschet to close the gap.

In an attack on his main opponent, Social Democrat chancellor candidate and Finance Minister Olaf Scholz, Laschet intensified his criticism over a money-laundering probe that has involved raids on Scholz’s ministry.

Shortly after the raids, Scholz—who also serves as vice chancellor—expressed frustration over how the probe had been handled by prosecutors.

“It’s breaking a political taboo when the vice chancellor questions the independence of the public prosecutor following a raid on his ministry,” Laschet told WamS.