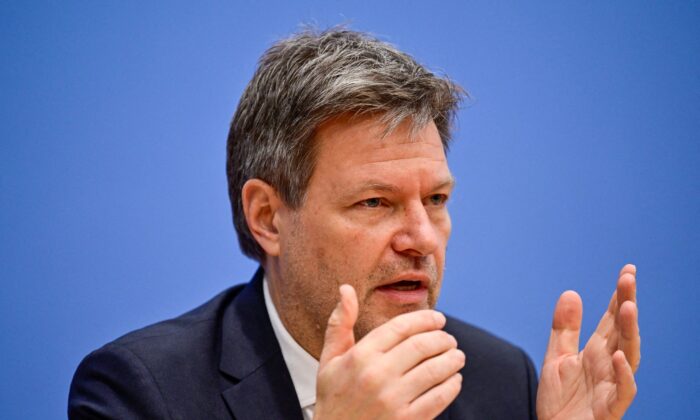 Germany’s gas storage facilities are filling up faster than planned, providing some hope amid fears of chronic shortages this winter due to a reduction in supplies from Russia, economy minister Robert Habeck says.

“The reservoirs are filling up faster than specified,” Habeck told Der Spiegel magazine in an article published on Aug. 28. He noted that the government expects that it could reach its target of 85 percent capacity by September, a month earlier than the original goal of October.

Overall storage was at 81.28 percent capacity as of Aug. 26, according to the Federal Network Agency’s latest report. Storage at the Rehden facility in northern Germany, one of the largest pore storage facilities in Western Europe, was at 63.41 percent.

Elsewhere, flows through the Nord Stream 1 pipeline connecting Russia and Germany were at about 20 percent of maximum capacity, according to the report.

Russian gas giant Gazprom is planning to shut down the Nord Stream 1 pipeline for three days of maintenance at the end of August.

Earlier in August, Mueller told German media outlets that he didn’t expect the country to achieve its November target as quickly as it hit the September target of 75 percent.

“In all our scenarios, we will miss an average filling level of 95 percent from Nov. 1. We will barely be able to do that because individual storage systems have started from a very low level,” he said.

Storage to Supply Households Over Winter

However, according to Habeck, companies will be able to “withdraw gas from the storage facilities as planned over the winter to also supply industry and households.”

His comments come after the country’s central bank chief, Joachim Nagel, said inflation could surge to more than 10 percent in the fall because of an energy squeeze prompted by Russia’s tightening of gas supplies.

Germany, which is highly dependent on Russian gas, has been working to wean itself off fuel from the country in the wake of Russia’s invasion of Ukraine. Germany is looking for alternative sources of gas to stave off acute shortages during the cold winter months and has restarted coal power plants that had been decommissioned.

In 2021, Russian gas accounted for about 55 percent of Germany’s total consumption, but in August, just 9.5 percent of that consumption came from Russia, according to the BDEW German power industry association.

Germany is currently in phase two of a three-stage emergency plan aimed at safeguarding against shortages, the final stage of which would involve rationing gas supplies throughout the country, but this hasn’t yet been triggered.

Liquefied natural gas (LNG) is also expected to flow to Germany through France once the two countries resolve organizational and technical issues.