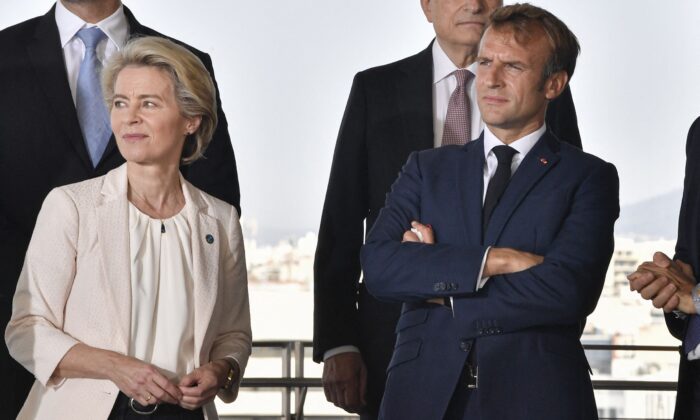 BRUSSELS—Germany joined France on Tuesday in berating the United States for negotiating a security pact in secret with Australia and Britain that cost Paris a lucrative defence deal, while the EU’s top official said such behaviour was unacceptable.

In a concrete signal of the bloc’s outrage, EU ambassadors postponed preparations for an inaugural trade and technology council on Sept. 29 with the United States, a gathering that was trumpeted as a major advance in the transatlantic alliance.

“One of our member states has been treated in a way that is not acceptable, so we need to know what happened and why,” European Commission President Ursula von der Leyen said in defence of France.

Her EU executive asked for the preparatory EU discussions for the U.S. trade and technology council to be taken off Wednesday’s agenda, two EU diplomats told Reuters.

France said it was assessing all options in response to Australia’s scrapping of a $40 billion submarine contract last week, while its biggest EU ally, Germany, rallied behind it, saying Washington and Canberra had damaged trust between allies that would be difficult to rebuild.

“We cannot exclusively rely on others but must cooperate, and we have to overcome our differences (within the EU) and speak with one voice,” German European affairs minister Michael Roth told reporters at a meeting with his counterparts in Brussels.

“We all need to sit down at a table; lost trust has to be rebuilt—and this will obviously not be easy. But we want to make a constructive contribution,” he added.

The dispute follows what NATO’s European allies say was Washington’s failure to communicate and consult during the chaotic Western withdrawal from Afghanistan.

Australia says the United States’ offer of access to U.S. nuclear technology to build nuclear-propelled submarines was too good to refuse. It will be only the second country after Britain in 1958 to be given such technology that allows Canberra to help Washington prevent China from gaining military supremacy.

Australia said it would cancel its order for conventional submarines from France, which were conventional, diesel-electric powered, and British technology under a new security partnership named AUKUS.

Britain is also looking for a global role after its decision to leave the EU.

French Foreign Minister Jean-Yves Le Drian said he wants to know why his country, which has a strong military presence in the Indo-Pacific, was left completely in the dark. The EU’s top diplomat was also not consulted, despite close historical, cultural, economic and security ties between Europe, Australia and the United States.

The spat has also put in doubt free-trade talks between the EU, the world’s biggest trading bloc, and Australia. They are currently under negotiation and the next round is due in October. It is not clear if they will go ahead.

“We cannot act as if nothing happened. We need to look into all options,” he told reporters in Brussels. EU foreign ministers, meeting in New York, also expressed solidarity with France.

Beaune welcomed the EU support, stressing that this was a European matter, not just a French problem, and the bloc should be more assertive in defending its interests, although it was unclear what steps the bloc could take quickly.

Beaune said this marked a further erosion of trust in Britain post-Brexit. Britain, he said, was also not properly applying the fisheries part of the EU-UK trade deal or the protocol governing the trading position of Northern Ireland.

“You cannot say that you will uphold the things that suit you and drop those that do not suit the British. So trust, consistency, respect of accords are, I think, essential,” he said.

By Philip Blenkinsop and Robin Emmott