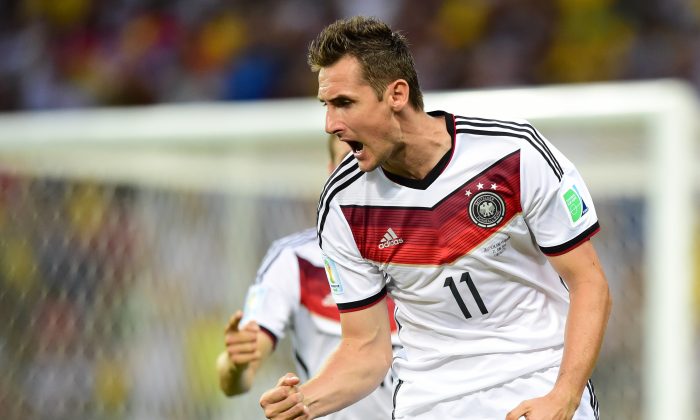 Germany's forward Miroslav Klose celebrates after scoring during a Group G football match between Germany and Ghana at the Castelao Stadium in Fortaleza during the 2014 FIFA World Cup on June 21, 2014. (JAVIER SORIANO/AFP/Getty Images)
Soccer

The match between Germany and Ghana finished in a 2-2 thriller.

Veteran striker Miroslav Klose had to come off the bench to save Germany from in their World Cup Group G match.

Earlier, Mario Goetze had put Germany ahead in the 51st, but Ghana equalized three minutes later through Andre Ayew.

Ghana captain Asamoah Gyan then put the Africans ahead in the 63rd, and the Ghanians celebrated.

But Klose later came on to rescue Germany and tie a World Cup record.

Mario Gotze opened scoring in the 51th minute for Germany.

Asamoah Gyan put Ghana ahead in the 63rd minute with a right footed shot towards the right near post.

Klose fired a right footed shot from very close range to the bottom right corner of the goal to equalize for Germany.

RIO DE JANEIRO (AP) — Argentina will be looking to seal its place in the knockout stages of the World Cup with a match to spare when Lionel Messi and his teammates face Iran on Saturday.

The Iranians are bound to make life difficult for one of the tournament favorites, as they did for Nigeria in a gritty 0-0 draw. But Messi’s superb winner against Bosnia-Herzegovina was a reminder why he has been voted world player of the year four times.

Germany, which opened with a 4-0 demolition of Portugal, can take a giant stride toward the last 16 when it takes on a Ghana side that slipped to a late 2-1 defeat by the United States.

The last game of the day pitches Nigeria against the Bosnians.

Things to watch for Saturday:

Pay attention to Argentina’s formation, it may just be the start of a rift between coach Alejandro Sabella and his captain Lionel Messi.

Sabella used a 5-3-2 formation for the first half of Argentina’s opening game in Group F, before switching to the 4-3-3 lineup which Messi prefers. Messi, who later made a thinly-veiled criticism of Sabella’s initial tactics, went on to score a superb goal after the break that proved to be the winner.

The first few minutes against Iran should reveal who’s won the tactical argument for this match.

“Our match with Argentina will be the most important and biggest match in Iran’s football history,” he declared. Queiroz was probably equally accurate when he said: “I still believe the majority assume there are only three teams in Group F.”

However, he meant it more as a warning, than a comment on popular opinion.

And at a tournament where world champion Spain and England are being sent home early, and Italy has been outclassed by Costa Rica, it may not be an empty threat.

ALL IN THE MIND

A win for Germany, and a victory or draw for Jurgen Klinsmann’s United States team the following day against Portugal, will guarantee early qualification from Group G.

However, the challenge for Joachim Loew’s side will be as much mental as physical. Like Italy, which lost 1-0 to Costa Rica on Friday, Germany has suffered from “second match syndrome” at recent tournaments — losing to Croatia at Euro 2008 and Serbia at the 2010 World Cup.

Loewe says it’s “a psychological problem” for teams to keep concentrating after achieving a good start, and it could strike his team on Saturday.

Meanwhile, Germany’s coach is sweating on the fitness of central defender Mats Hummels, who is nursing an injured right thigh. His absence could see Jerome Boateng move from right back into the middle, or the deployment of Shkodran Mustafi.

Ghana has had to cope with more than just the disappointment of losing its opener 2-1 to the U.S., a team it had knocked out of the last two World Cups.

Ghana’s Football Association has had to deny reports of a player revolt against coach Kwesi Appiah. A Ghanaian radio station claimed that players were unhappy with Appiah’s tactics.

Though it’s hardly an ideal preparation for the game, Loew doesn’t expect Ghana’s players to make it easy for the former world champions.

“They will fight until they bleed,” he said.

IN MEMORY OF THOSE WHO DIED Nigeria’s opening 0-0 draw has left the African side with plenty of work to reach the knockout stages, but the team coached by Stephen Keshi has a far greater motivation for victory over Bosnia-Herzegovina.

A suicide bomber killed 14 people who were watching Brazil’s World Cup game against Mexico at a viewing site in northeastern Nigeria on Tuesday. Keshi says the attack has cast a shadow over his team’s campaign in Brazil, while Joseph Yobo, who is set to captain Nigeria against Bosnia, added: “All we can do is do well for our country.”

Changes are expected in the lineup, with a possible start for striker Peter Odemwingie up front alongside Emmanuel Emenike.

Bosnia was a match for Argentina for large parts of its opening game in Group F and coach Safet Susic believes his team can do even better against the Nigerians.

“We haven’t shown everything we are capable of yet,” Susic said.