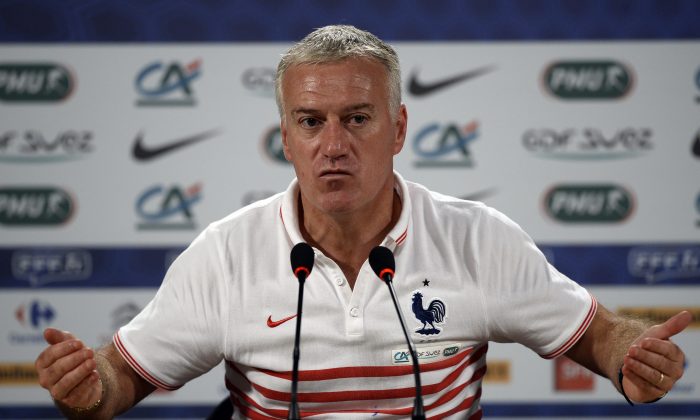 France's coach Didier Deschamps speaks during a press conference at a theater in Ribeirao Preto on July 1, 2014, during the 2014 FIFA World Cup in Brazil. (FRANCK FIFE/AFP/Getty Images)
Soccer

Germany and France will face each other in the World Cup 2014 in a quarter final match.

The two European footballing giants have contrasting form heading into the game.

Germany impressed right from the start of the World Cup, putting four goals past Portugal and conceding none at the back. Since then, however, the Germans have faltered, drawing Ghana 2-2, narrowly beating USA 1-0, and survived several scares to beat Algeria 2-1 in extra time.

2010 World Cup Golden Boot winner Thomas Mueller scored a hat trick against Portugal, but has struggled to produce the goods since, though not for lack of trying. Meanwhile, Germany’s defense continues its struggles, with Mats Hummels being unfit to face Algeria, and Per Mertesacker’s lack of pace being continually exploited.

Coach Joachim Loew has also yet to fix his midfield problem. Loew doesn’t seem comfortable with pushing Philipp Lahm back to a full back role despite Germany’s clear problem in that area, and Sami Khedira has yet to fully regain his pre-injury form.

France, conversely, seemed to have gone from strength to strength. After beating Honduras 3-0 in the opener, they embarked on a 5-2 near rout of Switzerland, and beat Nigeria 2-0 in the round of 16.

While Karim Benzema’s goals have dried up some what after two scorching performances against Honduras and Switzerland, the rest of his team are jelling together well, and picking up when he can’t get the goals. Notably, Paul Pogba has markedly improved after a lackluster opening game, and so has winger Antoine Griezmann. Also, Mathieu Valbuena has been a consistent threat for France down the right wing in all matches.

Coach Didier Deschamps’ plan of keeping the harmony in the squad has working out perfectly, and with more time, his team is looking more and more like plausible champions.

If the Germans don’t resolve their squad balance, expect France to quickly over-run them and progress to the semi final.

Germany and 7/5 to win the match, and France are about 21/10, as per most bookmakers on OddsChecker.

See the possible lineups below.

Check out an AP story.

France in World Cup QF as Nerve Holds vs. Nigeria

BRASILIA, Brazil (AP) — After being touted as one of the World Cup’s entertainers, it was a gritty performance which got France through to the quarterfinals in a 2-0 victory over Nigeria on Monday.

France’s forward line had made headlines with eight goals in its opening two group games, but there was little flair on display in a hard-fought contest against the African champions.

France needed a late header from midfielder Paul Pogba and an injury-time own goal from defender Joseph Yobo to overcome a robust Nigeria.

The reward is a quarterfinal against Germany on Friday at Rio de Janeiro’s Maracana stadium, following the Germans’ 2-1 victory over Algeria.

Pogba’s goal in the 79th minute followed Nigeria’s best spell of the match and came soon after France goalkeeper Hugo Lloris had made a crucial save to deny Peter Odemwingie.

“We’re not the prettiest or the best, but we can do good things,” France coach Didier Deschamps said after the game. “The deliverance came late. There was a lot of tension because we were up against a very athletic side and there were a lot of challenges.”

Nigeria, which had a goal ruled out for offside in the 19th minute after Emmanuel Emenike poked home Ahmed Musa’s cross from the left, wasted a lot of second-half possession.

Four years ago, France crashed out of the group stage, shamed a nation by going on strike and was jeered by its own fans and lambasted by politicians in the fallout from an embarrassing tournament.

“I’m proud of my players because we’re coming back from very far. I think we’ve given a lot of pleasure back to our fans,” Deschamps said. “I think there were 5,000 here and millions back home who will feel proud.”

Pogba’s crucial goal came after Nigeria goalkeeper Vincent Enyeama had just made a superb save to tip over Karim Benzema’s header. But he he flapped at the ball from the ensuing corner and Pogba pounced in the 79th minute for his first World Cup goal.

That atoned for placing a volley too close to Enyeama in a scrappy first half.

Scoring such a crucial goal will boost his confidence heading into the last eight game.

“We have four days left to prepare for another battle,” Deschamps said.

Yobo, who announced his international retirement after the game, turned the ball into his own net in stoppage time under pressure from France substitute Antoine Griezmann.

At the final whistle, France’s relieved players danced in front of their fans as dreams of a repeat run to the final — just like in 2006 — moved a step closer.

“We had the whole country behind us,” Pogba said. “It’s one of the proudest moments of my life.”

France started slowly and finished strongly in the second round match.

“I’ve yet to see a team play well over the whole 90 minutes,” Deschamps said. “Nigeria dropped off a bit and that allowed us to get on top.”

After Griezmann came on, Benzema finally came alive in the 70th, opening up the defense after a clever one-two with the France substitute. After Enyeama blocked Benzema’s initial shot, his follow-up effort was hacked clear by Victor Moses. Video technology confirmed that the ball had not crossed the line.

France failed to show the attacking flair of previous games, with Giroud skewing a shot wide early on.

He also appeared to elbow John Obi Mikel in an off-the ball incident, having done the same in last week’s 0-0 draw with Ecuador after coming on as a second-half substitute.

“The referee saw it and didn’t even give him a warning. Not a yellow card, nothing,” Mikel said. “The intention was there.”

Keshi was highly critical of American referee Mark Geiger’s handling of the game.

“The ref is a human being, but a lot of mistakes were questionable,” he said. “Giroud elbow, Pogba foot up … he decides what happens on the field. I’m not happy with the ref.”

Two chances were missed late in the half.

Full-back Mathieu Debuchy smacked a shot wide and into the back of a steward, and Emenike saw his sharp drive from the edge of the area palmed away by Lloris.

With Nigeria starting to dominate possession, Deschamps made a key change in the 62nd, taking Giroud off and bringing on Griezmann, freeing Benzema to play through the middle.

Nigeria continued to push forward and center half Laurent Kocielny cut out Musa’s dangerous cross from the right.

But toward the end, it was all France as Griezmann boosted the attack. He almost made it 2-0 in the 85th that Enyeama tipped over brilliantly. Instead, it fell to Yobo to inadvertently add France’s second goal.