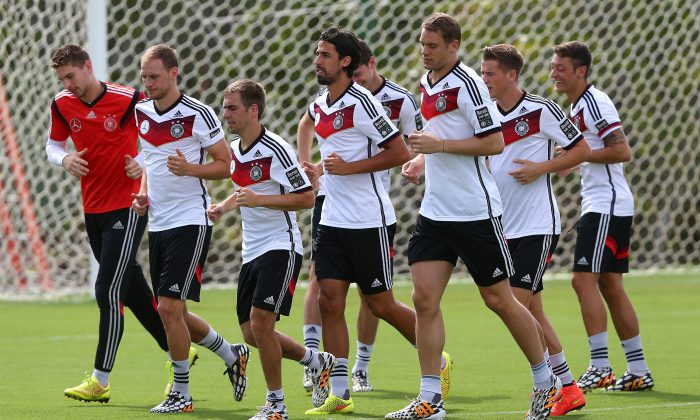 Germany and Brazil are set to face each other in a World Cup 2014 semi final match on Tuesday, July 8.

The game will be played at Estádio Mineirão, Belo Horizonte at 4:00 p.m. EDT.

After an impressive 1-0 win over France, Germany look like to go all the way now.

Germany coach Joachim Loew reverted to an older central midfield pairing of Sami Khedira and Bastian Schweinsteiger, while pushing Philipp Lahm back to right-back, a position commentators and football analysts have argued is his best position.

To beat Brazil, Die Mannschaft need to put in another “classic” German performance like they did against France. That means being solid at the back, and clinical up front with their goal opportunities.

Meanwhile, Brazil struggled somewhat against Colombia in their own quarter final match, and have lost their talismanic striker Neymar to a World Cup-ending injury, as well as their captain and center back Thiago Silva to suspension.

Coach Felipe Scolari needs to get the best out of his remaining squad if Brazil are to beat Germany.

Unfortunately, Brazil 2014 isn’t the Brazil team of the 1960s thru 1980s. Flair and skills are pushed to the periphery, and if anything, Brazil are playing a very European defensive and counter attacking style today.

Germany successfully neutralized the counter attacking initiative of France — a team arguably better at the European game — with their defending and ball retention, and their midfield trio of Schweinsteiger, Khedira and Toni Kroos hold and pass the ball better than the defensive-minded Paulinho, Fernando, and Luiz Gustavo.

If Brazil stand a chance of winning at all, it will come from individual moments of brilliance from Hulk, Oscar, and David Luiz.

Here are some possible lineups.

Odds to win via OddsChecker:

Checkout some highlights from when the sides met in the 2002 World Cup final.

Germany Concerned About Roughness of Brazil

PORTO SEGURO, Brazil (AP) — Germany midfielder Bastian Schweinsteiger thinks Brazil has crossed the line with some of its hard tackling ahead of the World Cup semifinals and is urging referees to keep a closer eye on the host team.

“I am all for a healthy hardness but some of Brazil’s fouls were over the limit,” Schweinsteiger said. “Brazilians are not only football magicians, hard tackling is part of their game — we have to be careful and so does the referee.”

Brazil committed 31 fouls in its quarterfinal win over Colombia, which had 23. But it was one particular Colombian foul, by Juan Zuniga, which overshadowed the others because it took out Neymar with a fractured vertebra and knocked the Brazilian attacking talisman out of the tournament.

“Brazil is an outstanding team that plays at the limit of the allowed and will go over the limit if necessary,” Germany assistant coach Hansi Flick told reporters on Sunday. He said the absence of the injured star could help galvanize the Brazil squad for Tuesday’s match in Belo Horizonte.

“It’s definitely a loss for Brazil, Neymar has lived up to expectations, but his absence can unite the team more and we expect a very strong opponent,” Flick said.

Schweinsteiger agreed, saying “We are all very sad that Neymar is not playing,” but adding that Brazil’s team will bind even more closely “and will try to win the title for Neymar.”

“They are two coaches with a lot of experience who have both won the World Cup,” he said. “They are clever coaches and you need intelligent coaches to win the title.”

Scolari’s job got a lot harder when Neymar was ruled out and captain Thiago Silva was suspended for a match after picking up picking up a second yellow card in the tournament.

Flick said that all 22 remaining Germany players are fit and ready to play. Backup defender Shkodran Mustafi is out of the tournament with a torn leg muscle.