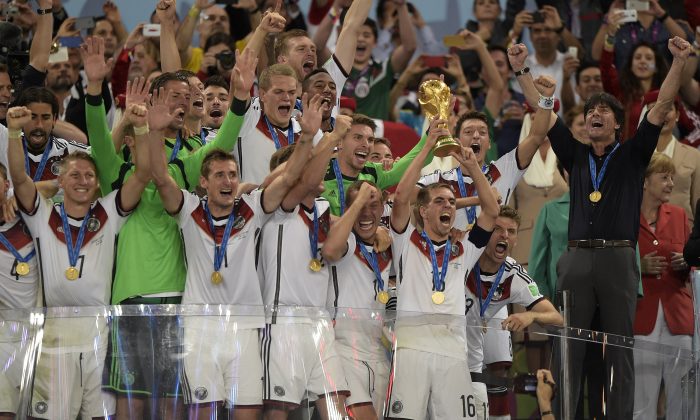 Germany's defender and captain Philipp Lahm (front-R) holds the World Cup trophy as he celebrates with his teammates after winning the final football match between Germany and Argentina for the FIFA World Cup at The Maracana Stadium in Rio de Janeiro on July 13, 2014. (JUAN MABROMATA/AFP/Getty Images)
Soccer

Germany are the World Cup 2014 champions after a 1-0 win over Argentina.

Record wise, Germany are the first European team to win the World Cup in South America, and this is also the first win for a reunified Germany.

Check out the highlights below, and a match report after that.

Gonzalo Higuain missed a chance to put Argentina ahead in the 20th minute, after Toni Kroos gifted him a backward header.

Higuain put one in the net in the 30th minute, but it was ruled for offside.

Mario Goetze scored the World Cup-winning goal in the 113th minute of the game.

Goetze Scores Late to Give Germany the World Cup

Goetze scored the winning goal in extra time to give Germany a 1-0 victory over Argentina on Sunday in a tight and tense World Cup final that came down to one piece of individual skill.

Goetze, who wasn’t born when West Germany beat Argentina in the 1990 final, controlled a cross with his chest in the 113th minute and in one fluid motion volleyed the ball past goalkeeper Sergio Romero and inside the far post.

It was a goal that gave Germany its fourth World Cup title in its eighth final, and left Argentina star Lionel Messi still walking in the shadow of his compatriot Diego Maradona, who led his country to the 1986 title.

Goetze had come on as a substitute for Miroslav Klose at the end of regulation time and the 22-year-old midfielder’s fresh legs made the difference.

Andre Schuerrle broke down the left flank, sending his cross into the area, and the Bayern Munich player did the rest with a clinical finish. The goal echoed that of Andres Iniesta’s four years ago, when the midfielder scored in similar fashion but from the other side of the area to give Spain a 1-0 extra time win over the Netherlands.

For Germany, the win ends a string of near misses since winning its last major title at the 1996 European Championship. The team lost the 2002 World Cup final to Brazil and lost in the semifinals in both 2006 and 2010.

It is Germany’s first World Cup title as a unified nation. It was also the third World Cup final between these countries and had been billed as a matchup between the perfect team and the perfect individual, pitting Germany’s machine-like unit against the brilliance of Messi, the four-time world player of the year.

He had one good chance to score when he was sent free in the area just after the halftime break, but sent his shot wide of the far post. It was a difficult angle, but still the type of chance he so often scores from.

Messi threatened intermittently throughout the match, but was effectively neutralized for long stretches. When he did try to break forward with one of his quick dribbles, he was surrounded by the German defense.

His free kick in the 120th minute went well high.

When the final whistle blew, Germany players collapsed in a pile in the middle of the pitch, while Messi walked with his hands on his hips toward the center circle.

Up until the winning goal, the game was more notable for top-class defending than creative attacking, but both teams had their share of chances.

Gonzalo Higuain wasted an opportunity by firing wide when gifted a chance in a one-on-one with Neuer, and later had a goal ruled out for offside.

Germany defender Benedikt Hoewedes hit the post just before halftime with a header from a corner, and ineffective finishing plagued both sides the rest of the way.