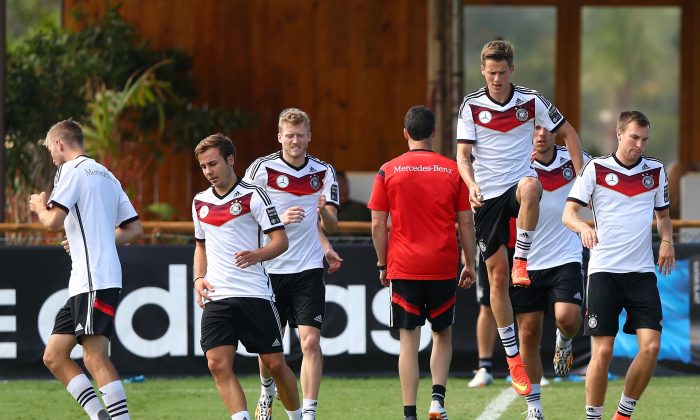 Germany and Algeria are set for a World Cup rematch on Monday, June 30.

MANGARATIBA, Brazil (AP) — Thirty-two years is a long time to wait for revenge.

It was way back in 1982 when Germany and Austria played out what went down in the history books as the “Disgrace of Gijon” to eliminate Algeria from the World Cup.

On Monday in Porto Alegre, Algeria faces Germany for the first time since that infamous match — with a spot in the quarterfinals on the line.

On paper, this match should be no contest.

Germany is a three-time champion with top-quality players in every position while Algeria has advanced past the opening round for the first time.

Add in the revenge and momentum elements, however, and this could become one of the most emotionally charged matches of the round of 16.

“At a World Cup, there are no desirable opponents and no easy opponents, especially not in the knockout matches,” Germany coach Joachim Loew said. “The Algerians have proven that they are an uncomfortable rival. We’ll be well prepared.”

Algeria is one of only three countries with a 100 percent win record against Germany. Of the other two, East Germany (one match, one win) doesn’t exist anymore, while Germany’s only game and only loss against Egypt came in 1958.

However, in their third group game in ’82 in Gijon, Germany scored in the 10th minute and for the next 80 minutes the Germans and the Austrians pushed the ball around without any real effort to score since that result allowed both to advance at the expense of Algeria.

Algeria had little to cheer for until beating South Korea and drawing with Russia in the group stage this year, producing a late equalizer against Russia to go through.

“This Algeria team has a lot of margin to (improve) and I suspect that we can (do) a lot better maybe in the next round against Germany,” Algeria coach Vahid Halilhodzic said.

With Ramadan set to begin over the weekend, Halilhodzic suggested that his players would receive a special allowance from a traveling imam to avoid fasting ahead of the Germany game.

Germany, meanwhile, is in perfect health after its 1-0 win over the United States.

“We are very ambitions and we have big goals,” said Thomas Mueller, who leads the team with four goals.

While Mueller’s lineup spot is not in question, Mario Goetze could replace Lukas Podolski at the other forward position.

Loew is likely to keep defensive midfielder Bastian Schweinsteiger in the lineup in place of Sami Khedira.

Schweinsteiger was praised for his performance against the Americans but he doesn’t seem to have energy for more than 70 minutes after nursing a knee injury before the World Cup.

The winner at the Estadio Beira-Rio will go on to play France or Nigeria.

“We are basically taking the rivals as they come, we are focusing on ourselves. We wanted to be first in the group at any cost and we achieved it,” Loew said. “It’s all or nothing now.”