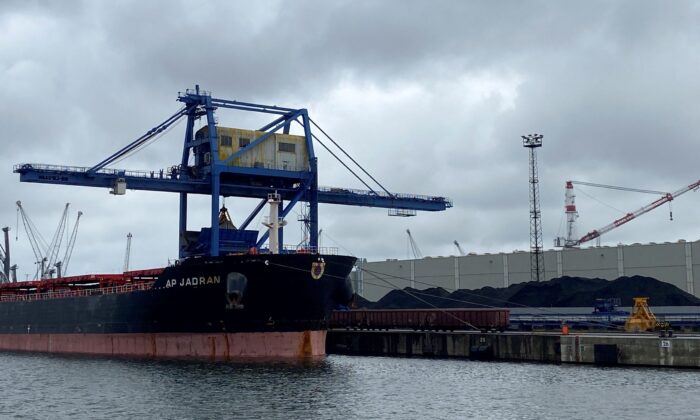 The Russian freighter "Ap Jadran" is unloaded from its hard coal cargo at the Baltic Sea harbor of Rostock, Germany, on Aug. 5, 2022. (Andreas Rinke/Reuters)
Markets

BERLIN—Germany imported goods from Russia valued at 2.9 billion euros ($2.95 billion) in July, according to data released on Monday, as elevated energy costs frustrated German efforts to wind down trade with Russia.

The value of German imports from Russia rose by 10.2 percent compared to July 2021, the Federal Statistical Office said.

The office attributed the surge mainly to higher prices, particularly in the energy sector, as cuts to Russian gas deliveries drive up energy bills for households and businesses in Europe’s largest economy.

In July, Germany imported crude oil and natural gas from Russia worth 1.4 billion euros, representing a 1.6 percent increase on the previous year, the office reported.

Imports of Russian coke and petroleum products were valued at 0.5 billion euros, up 72.5 percent, and imported Russian coal more than doubled in value to 0.3 billion euros.

While the value of imports from Russia rose, Germany was able to reduce the overall volume of goods imported from that country in July by 45.8 percent, the data showed.

Meanwhile, German exports to Russia fell by 56.8 percent in terms of value as Germany ramped up its export business with the United States and its neighbors France and the Netherlands.