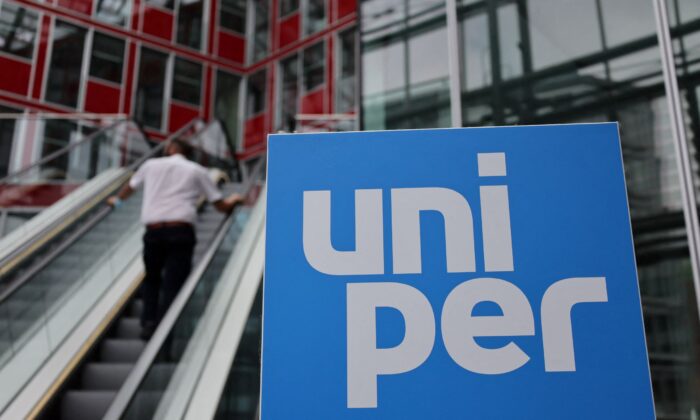 A person rides an escalator near the Uniper logo at the utility firm's headquarters in Duesseldorf, Germany, on July 8, 2022. (Wolfgang Rattay/Reuters)
Energy

Germany nationalized Uniper, its largest utility company and importer of natural gas, on Sept. 21, in a move to keep its domestic energy industry afloat and to avert a collapse of the energy sector.

The government in Berlin had earlier bailed out its largest gas importer in July with a $14.95 billion rescue loan, in the middle of a worldwide energy crisis caused by the war in Ukraine.

The German government will now buy out the 56 percent stake already held by Finland’s Fortum for $501 million.

The deal will inject about $7.9 billion into the company via a capital boost at $1.68 a share, according to Uniper’s website.

“Since the stabilization package for Uniper was agreed in July, Uniper’s situation has further deteriorated rapidly and significantly; as such, new measures to resolve the situation have been agreed,” announced Fortum in a statement.

The state-owned German bank KfW, which has already provided S12.84 billion in credit, will provide further financing to Uniper, according to its liquidity needs until the deal is sealed.

The total rescue package will cost the government around $29 billion, reported Bloomberg.

This will give the state control of 98.5 percent of the shares of the German utility company.

“Agreement on amended stabilization package: federal government to acquire ~99 percent stake in Uniper,” wrote the German utility in a tweet.

“The federal government, Uniper, and Fortum have today agreed on an amendment to the package of measures announced on July 22, 2022.”

The Consequences of Energy Dependency

The utility was already facing financial problems months before the Russia–Ukraine conflict, when it borrowed $9.8 billion in loans this January to cover margin calls.

The Dusseldorf-based utility has accumulated $8.4 billion in gas -elated losses out of a $11.8 billion in total losses this year, after prices for alternative energy sources skyrocketed.

“Today’s agreement provides clarity on the ownership structure, allows us to continue our business and to fulfill our role as a system-critical energy supplier,” said Uniper CEO Klaus-Dieter Maubach, on Sept. 21. “This secures the energy supply for companies, municipal utilities, and consumers.”

Uniper’s losses will likely surpass $17.7 billion this year, according to Bloomberg.

Uniper will hold an emergency shareholders’ meeting in the fourth quarter to finalize the deal, after which it will require regulatory approval from the European Commission in order to proceed.

The German utility will for now retain its Swedish hydro and nuclear assets, giving Fortum first right of refusal until the end of 2026 if those items are put up for sale.

Fortum will withdraw its controlling stake in Uniper this quarter, and will be released from its guarantee line of $3.95 billion, while its shareholder loan of $3.95 billion to the German utility will be repaid by Berlin in full after the deal is completed by the end of the year.

“Under the current circumstances in the European energy markets and recognizing the severity of Uniper’s situation, the divestment of Uniper is the right step to take, not only for Uniper but also for Fortum,” said Markus Rauramo, CEO of Fortum.

“The role of gas in Europe has fundamentally changed since Russia attacked Ukraine, and so has the outlook for a gas-heavy portfolio. As a result, the business case for an integrated group is no longer viable,” said Rauromo.

“What we see on the wholesale market is 20 times the price that we have seen two years ago,” Maubach told CNBC in early September.

The loss of Russian gas supplies to Europe during the cold heating season is causing energy shortages and price rises throughout the continent, sending European Union leaders into a panic.

Russia’s energy company, Gazprom, suspended gas flows to Europe earlier this month via the Nord Stream 1 pipeline, which put the German utility into a dire position.

The Russian energy giant warned that the sanctions were preventing it from operating the pipeline efficiently and that it would be shut down indefinitely for maintenance.

Germany, like much of Europe, is now attempting since the crisis in Ukraine began to reverse its decade-long energy policy that led to its reliance on Russian gas.

Gazprom’s decision to halt gas shipments came shortly after the G7 nations, including Germany, backed a plan to propose a 15 percent cap on the price of Russian oil in order to reduce dependency.

German Chancellor Olaf Scholz’s cabinet said it is determined to ensure the survival of its utility companies during the winter, as the energy crunch could worsen as temperatures drop, and is currently in negotiations to take control of its two other remaining gas suppliers.

Households and businesses throughout the bloc, particularly in Germany, are already facing financial ruin well before winter.

Governments in Europe have spent hundred of billions of dollars in public spending to alleviate the crisis.

Uniper shares tumbled up to 23 percent on the announcement, while Fortum shares rose as high as 20 percent.