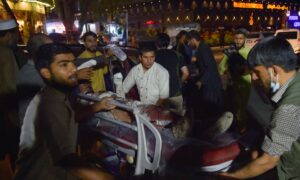 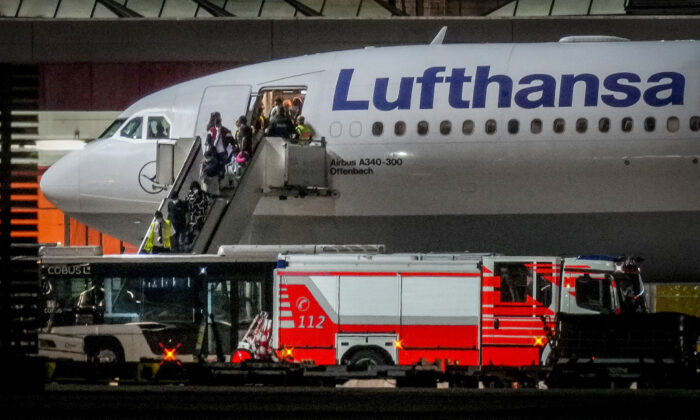 People disembark from a Lufthansa aircraft coming from Tashkent in Uzbekistan that landed at the airport in Frankfurt, Germany, on Aug. 18, 2021. On board were about 130 people that were evacuated from Afghanistan. (Michael Probst /AP Photo)
Europe

EBERSWALDE, Germany—Germany has left at least 5,000 former staff and their families behind in Afghanistan, a support network founded by German troops said on Friday, vowing to keep pressing for them to leave the country after an Aug. 31 deadline runs out.

The German military ended its airlift from Kabul airport late on Thursday after evacuating 5,347 people, including more than 4,100 Afghans.

Around 300 German citizens remain in the country, according to the foreign office in Berlin—besides an unknown number of former Afghan staff and their families.

“We estimate that at least 5,000 (former Afghan staff and families) were left behind,” Marcus Grotian, founder and head of the Sponsorship Network for Afghan Staff, told Reuters.

A key problem in getting these people out of Afghanistan at the moment is that the German embassy in Kabul is shuttered, meaning they cannot receive documents entitling them to travel to Germany, he added.

“Other nations have started to issue virtual visas, mailing them to people so that they can at least prove their identity as former staff members,” Grotian said, suggesting German authorities should follow their example.

He vowed the support network would do everything to bring the remaining staff and their families to safety, even if chances were slim to reach that goal any time soon.

Germany has said its promise to take in former Afghan staff will still stand after an Aug. 31 deadline for evacuations from Kabul airport has passed.

The Taliban have said that Afghans with permission to leave will be able to do so on civilian flights once foreign troops withdraw. But many Afghan former staff of Western missions fear persecution at the hands of the former insurgents who seized the capital less than two weeks ago.