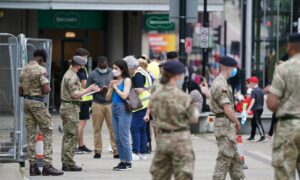 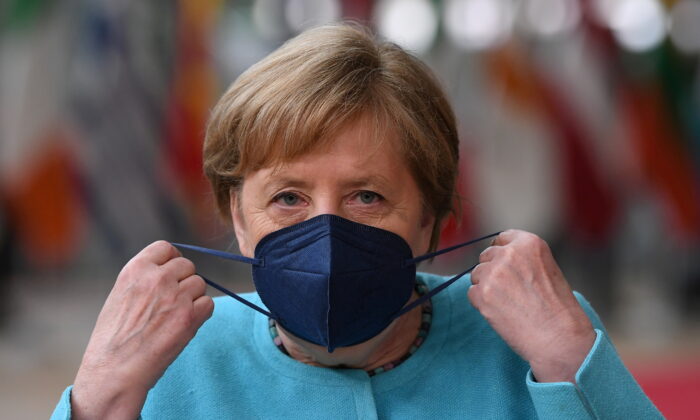 German Chancellor Angela Merkel arrives on the first day of the European Union summit at The European Council Building in Brussels, on June 24, 2021. (John Thys/Pool via Reuters)
Europe

BRUSSELS—German Chancellor Angela Merkel and French President Emmanuel Macron urged fellow European Union leaders on June 24 to take a firmer stand on travel from countries outside the bloc, such as the United Kingdom, to combat the Delta variant of COVID-19.

Merkel, arriving in Brussels for an EU summit, said she would lobby for a more coordinated approach, particularly with regard to letting tourists in from regions where virus variants were widespread.

“We are obviously concerned about the Delta variant,” she told reporters.

Macron told EU countries to be extremely vigilant about the variant, first found in India, which is highly infectious.

Macron said the 27-nation bloc needs to take coordinated decisions on opening borders to people from other countries.

EU governments have agreed on a “white list” of 13 countries, including Australia and the United States, for whose residents travel restrictions should be lifted. Noticeably absent is Britain, on which travel policy is mixed.

France and Germany require visitors from Britain to quarantine, while Portugal and Spain, which rely on British tourists, don’t. In the Lisbon region of Portugal, over half of the new COVID-19 cases are of the Delta variant.

The recent jump in infections there comes around a month after tourism-dependent Portugal opened to visitors from the rest of the EU as well as Britain.

Portugal’s foreign minister said on June 23 that the country hadn’t been careless when it opened its border to British tourists, after Merkel blamed the recent spike of COVID-19 infections on lenient travel rules. All British visitors must present a negative COVID-19 test on arrival.

He added Merkel was right to say that coordinated action was required, particularly as travel across borders within the EU eased.