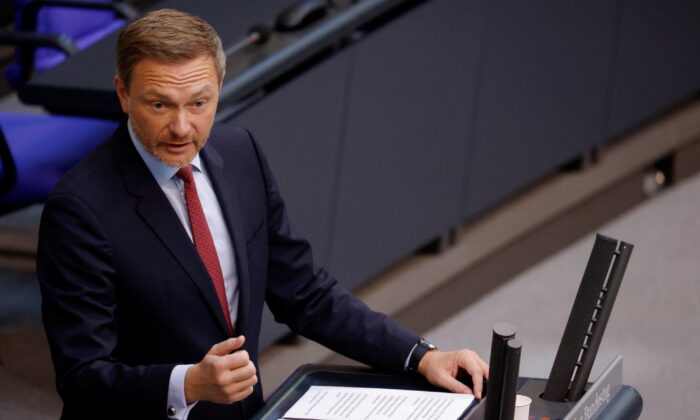 German Finance Minister Christian Lindner speaks during a budget session, in the plenary hall of the lower house of the German parliament, the Bundestag, in Berlin, Germany, on March 22, 2022. (Michele Tantussi/Reuters)
Europe

Germany is preparing to crack down on money laundering efforts with new legislation prohibiting cash transactions in the real estate market, according to officials.

The legislation is aimed at curbing both money laundering and other financial crimes, Bloomberg reports.

“Our national risk assessment shows that we need to do more in the real-estate sector,” Finance Minister Christian Lindner said Thursday at a meeting of the Financial Action Task Force (FATF) in Berlin.

The policymaking body establishes international standards and develops and promotes policies that aim to curb illegal activities such as money laundering and the financing of terrorism.

Germany’s Marcus Pleyer, who is deputy director-general in the country’s Federal Ministry of Finance, has served as president of the FATF since July 1, 2020, having succeeded Xiangmin Liu from China.

The upcoming legislation comes after the European Union last year announced the creation of an EU authority, the Anti-Money Laundering Agency (AMLA), in a bid to tackle large amounts of money being laundered into the mainstream economy every year.

According to officials, the ALMA will “strengthen the supervision of anti-money laundering and countering financing of terrorism in all EU countries.”

“Financial crime generates billions of euros in dirty money every year. At any one time, we know that criminals are filtering at least some of their proceeds through the EU financial system” vice president of the European Commission, Valdis Dombrovskis, said at a press conference in July last year.

“Our AML laws are now among the toughest in the world, but still not enforced equally across the board. And there are still loopholes in our financial system that we need to close,” Dombrovskis added.

The ALMA, Dombrovskis said, will not replace national authorities but “coordinate them to make sure that EU rules are enforced correctly and consistently” while supervising some of the riskiest financial institutions that operate across multiple countries in the EU as well as those that need “action to deal with immediate threats.”

The Commission also proposed a cap of €10,000 on large cash transactions.

Pointing to experts, Dombrovskis said that an estimated 1 percent of the EU’s annual GDP is linked to “suspect financial activity” which translates to billions of euros every year.

The United Nations Office on Drugs and Crime (UNODC) estimates that between 715 billion and 1.87 trillion euros are laundered each year, which amounts to between 2 and 5 percent of global GDP.

“N26 takes its responsibility in the fight against the growing threat of global financial crime, and in the prevention of money laundering, very seriously,” the group said in a statement at the time.

In March of this year, German prosecutors charged the former CEO of payments company Wirecard and two other ex-managers with fraud and false accounting in connection with the firm’s collapse in 2020.