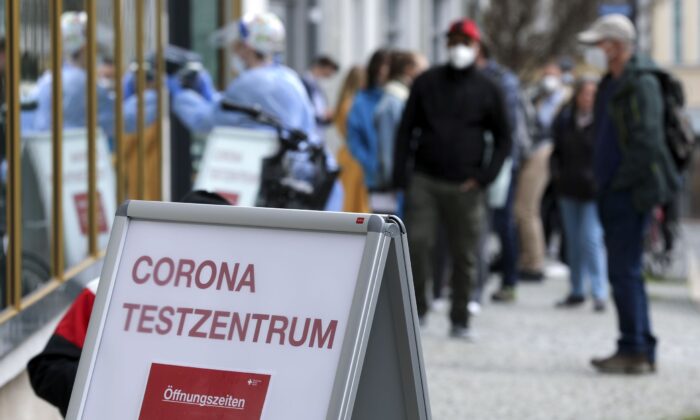 People queue outside a COVID-19 rapid test center to get a day pass to visit shops and cultural institutions, as the spread of COVID-19 continues in Weimar, Germany, on March 29, 2021. (Karina Hessland/Reuters)
Europe

BERLIN—Want to take the bus or train in Germany?

You may soon have to provide a negative COVID-19 test or proof of vaccination or recent recovery, as the country becomes the latest in Europe to consider drastic steps to tackle a new rise in cases in the region.

This fourth infection wave is challenging a government in transition, with three parties negotiating to form the next cabinet after September’s inconclusive election.

The Social Democrats, Greens, and FDP said on Monday they would add harsher measures to their draft law under consideration by the Bundestag (lower house of parliament) to deal with the outbreak.

So-called 3G rules requiring a negative COVID-19 test, or proof of recovery or vaccination should apply to public transport as well as workplaces, according to a policy document by the three parties.

It was unclear how they would be enforced.

However, she told reporters later there was no agreement on compulsory vaccination in some sectors like care homes, highlighting a division in the would-be government between her party and the SPD on the one hand, and FDP on the other.

The proposal for new curbs in Germany came as Austria’s government on Monday imposed a lockdown on people unvaccinated against COVID-19.

Some other European countries require passengers to provide proof of vaccination or tests for long-distance travel on public transport. But it is unclear if any others require it for urban transport.

The Bundestag is due to vote on Thursday on the draft law so it can come into effect before the expiration of Germany’s state of emergency on Nov. 25 which had provided the legal basis for previous pandemic measures.

The new draft law excludes measures like school lockdowns and curfews applied during earlier waves of the pandemic.