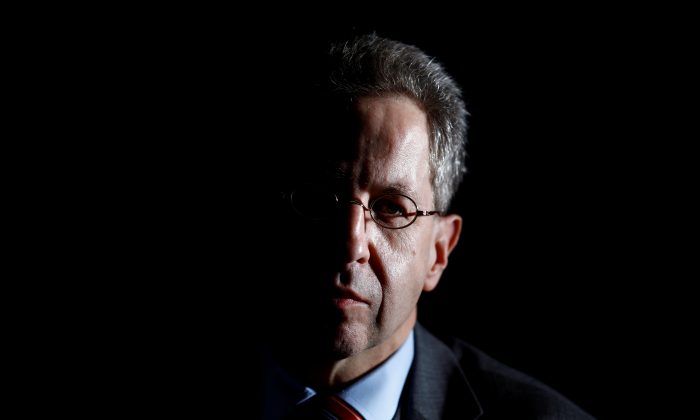 Hans-Georg Maassen, President of the Federal Office for the Protection of the Constitution, in Berlin, Germany on Jan. 30, 2018. (Reuters/Axel Schmidt/File Photo)
Europe

BERLIN—Germany’s domestic spy chief has expressed skepticism that migrants had been hounded in Chemnitz after the fatal stabbing of a German man, undermining Chancellor Angela Merkel who has said images from the eastern city “very clearly” showed hate.

Germany has been deeply shaken by the most violent right-wing protests in decades after the Aug. 26 killing of the German man in Chemnitz, in the state of Saxony, for which two immigrants were arrested.

The Sept. 7 comments by Hans-Georg Maassen, head of the BfV domestic intelligence agency, aggravated tensions about whether politicians and the authorities are being too complacent in the face of rising xenophobia in Germany, where many had thought the lessons of Nazi history had long been learned.

Michael Kretschmer, Saxony’s conservative state premier, said on Wednesday, Sept. 5 that migrants had not been hounded but Merkel rebuffed his remark a day later, saying pictures had shown “hate and … the persecution of innocent people.”

Maassen appeared to undermine Merkel by telling Bild newspaper’s Friday edition, “I share the skepticism about media reports on right-wing extremists hunting down people in Chemnitz.”

He added, “The domestic intelligence agency has no reliable information about such hunts taking place.”

Maassen’s comments prompted swift accusations from mainstream politicians that he was sowing confusion about events in Chemnitz, known as Karl-Marx-Stadt when it was part of former Communist East Germany, and demands that he go.

Maassen said there was no evidence that a video circulating on the internet was authentic, adding, “Based on my cautious assessment, there are good reasons to believe that it amounts to intentional misinformation, possibly to divert the public’s attention from the murder in Chemnitz.”

Katrin Goering-Eckardt, leader of the opposition Greens in parliament, said Maassen’s decision to focus on the video rather than some protesters performing the illegal Hitler salute in Chemnitz showed he was no longer fit for his job.

“Two crucial posts for the security of the free, democratic basis of our country are, with him [Maassen] and his supervisor [Interior Minister] Horst Seehofer, clearly in the wrong hands,” Goering-Eckardt added in a statement.

Katja Kipping of the far-left Linke also said he should go.

On Thursday, Sept. 6 Merkel appeared at odds with Seehofer, who said, “Migration is the mother of all problems.” She later responded, saying, “I say it differently. Migration presents us with challenges and here we have problems but also successes.”

At Friday’s regular government news conference, Merkel’s spokesman was asked about her trust in Maassen and responded, “Mr. Maassen has an important and responsible role.”

An Interior Ministry spokeswoman said Seehofer had confidence in Maassen.

Merkel, who has said images from Chemnitz “very clearly” showed hate, on Thursday accused the far-right Alternative for Germany (AfD) of using violent protests over the stabbing blamed on migrants to stir up ethnic tension.

Thomas Oppermann, a senior member of the Social Democrats—junior partner in Merkel’s ruling coalition—said of Maassen, “The president of the domestic intelligence agency is causing confusion at the moment.”

By Michelle Martin and Paul Carrel